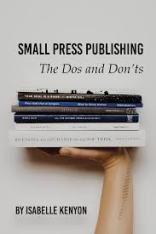 Small Press Publishing: The Dos and Don’ts is more of a how-to guide which covers the basics of getting a small press publisher through their first year. Its chapters cover market research, finances, marketing and publicity, a case study for one of Fly on the Wall’s own anthologies and a list of resources for printers, reviewers and blog tour organisers. Here “finances” refers to working how much to charge for books and what budgeting is required; and the book is not a guide on sources of funding. Marketing covers social media as well as more traditional methods such as reviews and press releases.

The book is written in a friendly, conversational style, rather like a meeting with a business mentor over a cup of coffee rather than a formalised strategy. Highlighted text boxes ask questions to get readers thinking about their own venture and what key approaches they need to pin down.

The text does rather skim the surface though. The advice on writing a press release is correct in saying you need to put your key information in the first paragraph; but it does not explain why or give a template. While it does say that ‘a book launch won’t be treated as “news” but more likely a “feature” based on its topic’, it doesn’t suggest ways of promoting a book launch or release by creating an angle that would make a launch newsworthy beyond the book’s topic or author’s location. Curiously, local radio stations are omitted altogether. An interview on radio won’t directly sell books but would support and help create a buzz around a launch. Similarly, the book suggests creating posters for events/blog tours but doesn’t give examples and assumes readers know what information to include.

The advice on getting reviews is short and includes the line ‘you will need to target literary journals, which often have a dedicated reviewer attached to their publication.’ I don’t know of any literary journal which has just one dedicated reviewer. The book also omits the sound advice to approach the journal first rather than send unsolicited hard copies. Some reviewers (for blogs or literary journals) prefer electronic copies. The Resources section does include London Grip on its list of review outlets!

There’s a bonus in the form of interviews with small presses including Broken Sleep, HTVN, Ghost City Press, Queen of Swords, Louise Walters Books, Newfound Journal, Neon Books, Mason Jar Press and Indigo Dreams, all with the same questions so it’s interesting to compare and contrast responses. All publishers describe their love of what they do and how being passionate about it is a must. There are some sobering responses about finances and some editors are open about wanting to establish their presses with the aim of paying themselves eventually.

This is a book which sees itself as being aimed at anyone wanting to set up a small press or those still in the early stages of their journey as publishers and it is very much for complete beginners. However, it’s also a useful read for writers wanting to be published by small presses to give them an understanding of how the small press business models work and what to expect in the way of editing and marketing support.