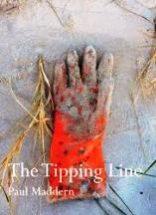 Poetry review – The Tipping line: John Forth finds that Paul Maddern’s collection is far less daunting than its unusual form might suggest

The tipping line, we’re told early on, is ‘the point / where what floats in finds rest’. And it will be a metaphor throughout this long poem in eight parts, which are letters to Rowan, the actor son of Maddern’s friends Ken and Jane Vickers. An anchor is thrown down early in the form of ‘Gods & Monsters’ – a film about James Whale, the director of the 1928 Karloff Frankenstein, who also directed Journey’s End among other plays and films, and who was responsible for sketching the head of the ‘Creature’ we all know – a head which began and/or will evolve into a symbol of the war dead. So we have autobiography that is simultaneously an exploration of artistic practice and also a journey stopping at Donegal, London, Leeds, Bermuda (Maddern’s birthplace) and New York. In what has to be coincidence, this poem which took six years to pull together appeared in 2018, the bicentenary of the publication of Mary Shelley’s book and the centenary of the WW1 Armistice. Laced as it is with lists & illustrations & the various paraphernalia of war – together with extracts from letters of soldiers and of the painter Paul Nash – it will be clear that there is a lot of material present that is not digested in the poem but which certainly and productively washes up in it. Once all this is settled, the poem’s surprisingly starkly titled ‘units 1-8’ add up to an autobiographical verse novel written mainly in 4-5 beat lines, with fragmentary interruptions and a narrative framework provided by the letters to Rowan.

One significant key to the poet’s method is the epigraph to Unit 7, taken from a letter to The Times from Paul Nash in June, 1933, which states that his formation of Unit 1 (Britain’s first surrealist group) is intended as ‘a method of concentrating individual forces: a hard defence, a compact wall against the tide, behind which development can proceed and experiment continue’. So it is no surprise, perhaps, that Unit 1 of ‘The Tipping Line’ provides not only a definition of it but is also the richest and most compressed section of the poem – supplying most of the information quoted at the beginning of this review. We learn in Unit 7 that Maddern shares with Paul Nash ‘a love of finding objects, reshaped for purpose’ and a part of the poem’s method is beachcombing, both metaphorical and a result of targeted research among war relics and documentation.

The centrepiece of Unit 1, on a beach in Donegal, is ‘Creature’ – who is to appear intermittently throughout the poem as emblem and even as graffiti on a house wall in Leeds:

In Unit 5, in the Royal Ballet Frankenstein at Covent Garden, we celebrate ‘the new Creation myth’:

It’s likely a celebration also of the Outsider, the Artist, challenging constraints within his chosen form – another lesson for the young artist in receipt of the letter. In Donegal, the narrator had created for his recipient Rowan ‘an amphitheatre’ made of beach and rock where all manner of artists and performers, including Creature, began their masquerade – and in Unit 2 the next element is found at Camden Market, a copy of Journey’s End complete with marginal notes added by two sisters at school. The girls are, in turn, initially used to create a possible secondary plot which grinds to a halt – leaving only the play, R.C. Sherriff and his fellow soldiers to join Paul Nash in the wings. In this way, apparently random detail will be added and built on throughout, as when the narrator uses quotations from a student’s creative work that he is tasked with assessing. One question a reader might ask is whether all this material seems plausible content for a letter to an eighteen-year-old drama student, but in fact the relationship already established has been built to accommodate this and much more.

The narrative is always as readable in verse as one would expect of a prose memoir, although I felt there was some strain on the edifice when in Units 6 and 7 the death of the poet’s father and subsequent ‘makeover’ of the condo in Bermuda is presented almost without breaking stride. At this time also, Rowan is the recipient of a long monologue spoken by ‘Rumour’ who charts in detail the names and injuries sustained by Bermuda’s 93 war dead. In that sense the poem has an additional purpose as remembrance memorial, and the published lists used throughout reinforce this, but the task of unifying such material is truly enormous. In Unit 8 we are returned to the beachcombing on Tramore Strand, which has since been visited by a Rowan mourning a lost love by plunging into the waves – a scary moment brought to earth:

The symphonic finale briefly pulling all of these elements together is as Romantic as it can possibly be, is a hybrid in which the Irish poetic past is picked up and run away with. In an interview* printed in ‘The Honest Ulsterman’ (June 2019) Maddern identifies with Irish writers who ask ‘what a poem might achieve outside of accepted lyric norms…thinking about where form might be heading’. One of his great achievements in The Tipping Line, it seems to me, is that of providing a framework, using a variety of linking devices, to keep the reader onside while the poem yokes together a very wide range of disparate material. I might remain reticent about some of these methods, dependent on the extent to which the material is ‘digested’ as opposed to being simply presented, but I can have few doubts about what he calls ‘the interconnectedness of artistic practice and the lingering impact of historical events’. Maddern was new to me and I have to confess to an early impression that this long poem might be daunting, though it’s anything but that – I read it through in two sittings made possible by careful choreographing at every step, as you might expect of a former dancer.