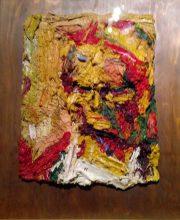 The fascinating venue of Chiostro del Bramante at Arco della Pace near piazza Navona in the centre of Rome hosts again an exhibition in collaboration with Tate Britain.  The previous one was on Turner (Turner: Opere della Tate) in 2018.  This time, the artworks of two major British painters, Francis Bacon and Lucian Freud, are on display together with four more artists related to the so-called School of London: Paula Rego, Frank Auerbach, Leon Kossoff and Michael Andrews.  They lived in London and met every day in bars and cafes in Soho, such as Gargoyle and Colony Room, exchanging ideas, getting drinks and attending occasional entertainments.  They were all refugees of sorts or immigrated from other countries.  Freud came to England in 1933 with his family when he was eleven fleeing from the Nazi regime.  Bacon was born in Ireland and Andrews came from Norway.  Rego left Portugal and Salazar’s dictatorship to study art in London.  Auerbach fled the Nazi regime as well and Kossoff was the son of Jewish Russian refugees; they both attended the course of David Bomberg at The Borough Polytechnic Institute in London, who believed that painting was an extremely important activity but also very difficult.  These artists chose London as the place to develop their study and art in dialogue with the aftermath of the second world war, the destruction, reconstruction and the changes that followed.

The exhibition, curated by Elena Crippa, curator of Modern and Contemporary British Art at Tate Britain, has a chronological and thematic approach.  It covers seven decades pointing out the challenge the artists embraced, that is, renewing painting hoping that this old medium could communicate the optimism, crisis and changes that occurred during the period.  The tensions and wish for change are present in the different artists whose personal research and introspection are expressed with different techniques and from dissimilar perspectives.  The fragility of human condition and its contradictions are the central themes common in all of the artists of the School of London.  These themes relate to war, immigration and the consequent displacement that makes people vulnerable.  Therefore, their artworks reveal a shocking reality without filters but also tenderness, acknowledging our fallen human condition.

The name School of London was coined by R.B. Kitaj and referred to this group of artists based in London who had an avant-garde approach of sorts mostly in figurative painting but with a strikingly subjective and uncompromising style.  They were not a consistent movement but were friends and made London a cosmopolitan art centre.  The artists’ works on display are very different one from the other, showing their unique research path that brought them to different conclusions or different ‘truths’.  Freud, for example, worked from life; the model was present in front of him, sometimes lying in twisted poses.  Their physicality, the flesh present in large, thick impasto, shaped the figure like a sculpture.  On the contrary, Bacon painted from photos, his isolated figures do not narrate or are not in relationship with the painter, as it is instead in Freud, but express an alienating angst.

The exhibition compares the different artists in the introductory rooms displaying portraits such as ‘Narcissus’ and ‘Girl with a kitten’ by Freud and two female heads in charcoal by Auerbach and Kossoff.  Both Auerbach and Kossoff constantly drew adopting a frantic approach that erased and re-worked the picture looking for the right form.  The rendering of their works is intentionally sketchy, uncertain and in progress.  On the other hand, Freud’s portraits look linear, finished and complete.  The frailty of the human condition is not expressed in the drawing technique, as in Auerbach’s and Kossoff’s pieces, but in the gaze of the sitters, looking aloof and estranged.  Bacon’s portrait of the ‘Life Mask of William Blake’ expresses a similar instability, ‘the anguish of contemporary life’ as he said, in the deformed face with huge ears and hollow cheeks.  His works, displayed in a large room, suggest violence in the distortion of the human body.  He focused on physicality; the flesh and bodily fluids are suggested by the texture of the painting and smearing of the colours.  Everything is in movement, unstable and painfully uncertain.  The figures almost melt showing gaping mouths, a voiceless repressed scream.

Less space is dedicated to the four minor artists of the exhibition, Andrews, Rego, Auerbach and Kossoff.  Rego’s ‘The Dance’ and ‘Bride’ are figurative paintings in which the characters of the pictures eerily look at the viewer as if challenging their views.  They propose thought-provoking aspects of women who fight to gain their voice and speak their truths, like the girl who dances alone bigger than the other characters in the painting, independent and self-confident.  Michael Andrew’s ‘Melanie and me swimming’ is based on a photograph of the artist swimming in a pool with his daughter aged six.  He mixes the real and memories.  The two figures hold each other’s hands in a black pool as if emerging from a dream.  Leon Kossoff’s apparently sketchy work was actually the result of a long re-working.  Once again, the movement of the figures and the buildings (he often drew Christ Church at Spitalfields), looking as if they are collapsing, have a destabilising power.  In a similar way, Frank Auerbach expresses this change in his recording of the same landscape, Primrose Hill in North London.  He drew it outside in more than fifty drawings and then developed his work in his studio on large canvases.  The project went on for a year (1967-68) with several restarts conveying a sense of the unfinished, a work in progress.  Nevertheless, it encompasses all seasons, paying attention to the changing of light and weather.

A major space is dedicated to Lucian Freud at the exhibition.  Certainly, he stands out for the maturity and mastery of his artwork.  Excellent examples of his work are on display, such as ‘David and Eli’ (2000), ‘Leigh Bowery’, a portrait of the painter’s mother, ‘Girl with a white dog’, ‘Standing by the rags’, and plants.  The physicality and sensual nature of the human body is expressed in the thick impasto of the painting.  The skin, the rags or bed linen, the fur of the animals are treated in a dense tangible way that gives them the quality of flesh.  He was enchanted by bulky bodies and treated them as sculptures in his paintings exploring and analysing their carnality.  He conveyed the discomfort and reality of flabby decaying flesh, giving prominence to bodily secretions and sexual organs.  The naked human body is compared to animals in contrast with the classical nude, smooth and idealised.  Therefore, the harsh rendering of Freud’s portraits communicates a sense of alienation and artificiality in the poses of the sitters and in the high viewpoint he sometimes adopts.  Rawness and keen observation, artificiality and naturalness are both present in his work in an apparent contradiction that appeals the viewer.  They are ugly and beautiful at the same time, an expression of a humanity that is both frail and vigorous in its struggle to survive.

The exhibition at Chiostro del Bramante displays good examples of the artworks of the School of London with special attention to Bacon and Freud.  Interesting captions and the content of the audio-guide (included in the ticket price) effectively guide the visitors in the complex changing world of London modern art after the second world war.  Interesting connections between portraiture, selfie and social networks intriguingly test the viewer along the route of the exhibition suggesting possible and impossible relationships.