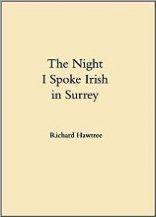 The richness and multifaceted nature of Irish culture and language is cleverly explored in Richard Hawtree’s debut pamphlet. Speaking Irish in Surrey is an unusual experience that contributes to the poet’s fluency both in language and in imagination. It is ‘pure, unadulterated, Surrey Irish’ denoting ‘archaic precision’ and crafted syntax. The poems merge impressions of landscape with historical and literary references together with connections to physics, Latin and Anglo-Saxon poetry. The poet invites readers to immerse themselves in the exuberance of his verses that open to life in an ‘April’s fling’ which ‘will happen anyway’ and will lead to a ‘space walk’. This encompasses different dimensions of time and place and is rich in a language that relies on and links to a glorious past where images and metaphors flourish, and pictures of characters and historical events contribute to create a variegated context. Nevertheless, language seems doomed to possible extinction like all human things:

Language itself is renewed by the poet in a succession of images and metaphors, ‘[a]nd yet beyond lies wordlessness’. It seems as if the poet continuously struggles to keep language alive, especially literary language, referring to and connecting with an ancient past. Latin and Irish heritages are the vital connections that the poet reinterprets from a modern point of view that seems to grant continuity. This occurs, for example, in “Love/Hate, after Catullus 85”, in which the uncertainty of the lover’s condition is questioned in the last line:

The poem inspired by Catullus is linked to the work of the Irish poet Michael Hartnett in the same sequence:

Thus, in a modern context, language becomes subtler, the imagery evokes rather than states, in a play of hide-and-seek where the subject is almost eroded.

A similar perspective is found in ‘In Her Flashy Flip-flops…’, a version of fragment 358 by Anacreon, in which the ironic reinterpretation of the 5th century BC poem emphasises its elusiveness and yet its modernity that grants continuousness in language between past and present:

The ancient past is revived in the poem in a humorous way. The rethinking emphasises the connection and the poet’s work functions as a bridge.

A similar idea lies behind the poems inspired by Irish language, landscape and culture. The “Three Cork Haiku’”sequence reveals in unflinching clarity how the materiality of the city’s streets and buildings mark the poet’s language:

Imagination enters the real and changes it as can happen a magic world where everything is possible. The poems build up images that not only evoke reality in a unique way but also invite the reader to construct a new vision. This contributes to the renovation of language and suggests new perspectives.

Hawtree’s poetry uses figurative language and frequent alliterations which are reminiscent of Old English and Old Irish prosody. Examples of this fascinating technique are in poems such as “on and Irish psalter raised from the Faddan More bog” and in “Come Down So, following a seventh century Irish prayer”. In the first poem the repetitions and the alliteration of ‘b’ and ‘s’ sounds emphasise the shape of the bird merging the form of the picture with the image evoked by the lines. In “Come Down So”, the anaphora reiterates the prayer that is both for life and for absence of life or silence, two aspects of being human. The poem ends with a cryptic image of ‘the hidden//turtle doves inside your nest’, which conveys vulnerability and innocence.

Connections with physics are in “Collider”, a poem that combines a heroic, mysterious past with a multifaceted present:

The past seems untouched and static while the present is shifting, ever-changing, contingent, and the future is unpredictable. The connection with science adds a layer of apparent ‘certainty’, that is, the evidence of a ‘reality’ that is, nevertheless, in part a product of our creative deductions. The message is open-ended, in progress, inviting the reader to complete it with their thought and imagination, as in “To Orpheus”, in which the world of poetry, though enchanting, seems aloof from reality.

Merging past heritage and present contingency also means to looks for a balance:

This balance is not to be taken for granted but needs to be looked for and re-stated each time in ‘a smile’ that cleverly points to a new comprehensive vision.

Hawtree’s pamphlet explores language, connecting ancient and modern cultures, looking for a balance that is temporary yet somehow conveying continuity through poetry. His precise lines encapsulate in forms and imageries a world in-between, in which past and present combine in an innovative captivating vision.

The Ugly Side of Beauty. Connie Woodring. Bacon and Freud: The School of London. Review by Carla Scarano.