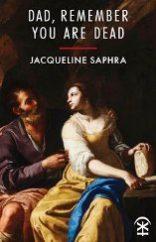 Poetry Review – Dad Remember You Are Dead: Alwyn Marriage reckons that Jacqueline Saphra’s new collection is a book to wake the reader up

It may be that there is still a yearning for poetry that fits Wordsworth’s “emotion recollected in tranquillity”; or perhaps it’s just that not enough people take poetry seriously and therefore feel threatened when anger bubbles up through the lines. Whatever the reason, we are not very used to anger in poetry, certainly not in manifestly good poetry such as that presented in Saphra’s Dad, Remember you are dead.

However, faced with climate change deniers who continue to contribute to the destruction of humanity’s future, or injustice, exploitation, poverty, cruelty, and, yes, misogyny and sexual predation, anger is an entirely appropriate reaction.The poems in Jacqueline Saphra’s latest book may not be for the faint-hearted, but they should certainly be on the reading list of anyone serious about poetry. They are fearless, forthright poems, in a collection of unwaveringly fine poetry. Poetry is at last embracing feminism, and Saphra, like Sharon Olds and Helen Ivory, is well capable of celebrating it. The result is hard, uncompromising feminism that makes the feminism of many us appear slightly soft and cerebral. However, there is no risk of her work descending into an idle rant, for Saphra knows how to control her passion and she hones it through careful craft, including the use of traditional forms such as the sonnet, the triolet and rhyming couplets.

The title of this collection is not as snappy and colourful as All my mad mothers, but it allows the poet to set out as uncomfortably as she intends to continue; and her father, or step-father (and it is not always completely clear which she is referring to), gets a consistently bad press from the poet. The father figure is remembered as a strong bullying man who, when she was a child, tried to force her to do what he wanted, for instance when she was learning to ride a bicycle, dive and climb. None of these activities are remembered with pleasure, largely because of the insistent, unsympathetic ‘encouragement’ of her father.

When the father-figure becomes ill (and subsequently dies) the poet creates a mask of her face when visiting him, so that he won’t be able to read her uncomplimentary emotions:

The malign influence of the father continues even after he has died:

But under all the anger, there is some confusion in the poet’s emotions:

It is not only her own father who comes in for censure. In “The Big Picture” (p44), a searingly powerful poem, we have Saphra’s response to violence against other women. In this one poem she shines the spotlight on the rape of Leda, the stoning of a Muslim woman and a random act of violence glimpsed through a window; and the poem ends with the sharp metaphor of a broken hinge. The same metaphor occurs in the poem “The Hinges are Broken”, in which what appear to be the embarrassments and irritations suffered over many years rise to the surface and are thrown back at the perpetrator:

Again empathising with other women, Saphra has two poems in which she expresses delicate sympathy for a young naked girl posing as a model for an artist father. Other references to art proliferate as she reflects on paintings, particularly paintings of the story of Lot, whose daughters, according to the Old Testament, made him inebriated then induced him to have sex with them so that they could conceive, thus ensuring the future of the race. One of these poems, “Chiaroscuro”, is based on Artemisia Gentileschi’s painting ‘Lot and His Daughters’, and includes the graphic image of one daughter’s attitude in ‘fingers curled around the handle of a knife’ (p20). In the other, “After Sodom”, reflecting on ‘Lot and his Daughters’ by Peter Paul Rubens, she describes Lot as

The title of the collection comes from the poem “Dad and the Facts”. Here a litany of unattractive facts about her father, plus her irritation at the continued psychological presence of her dead father creeping past her defences, ends with

In “My father’s parts”, the poet paints an unrelievedly unattractive portrait of her father’s physical appearance (p27); and in the longer poem, “My Father’s Stories” (p48), she recalls many of the man’s unkind or irritating conversations, and shines a strong, merciless light on him. However, although the descriptions are sometimes macabre and uncomfortably direct, there is plenty of humour scattered through the poems.

Although modern in style, there are references to the poetic canon. For example, there are oblique echoes of Donne (‘to him she was a Newfoundland’), the Bible, Milton and Yeats. There is also a slight softening of tone towards her step-father in “Forgiveness” (p38), in which she describes two better meetings with him after years of avoiding him. The slightly softer subject matter of this poem, along with the gentle humour, make this a particularly attractive example of Saphra’s poetry.

I recommend this book. It will wake you up and possibly challenge you; but it will leave you thinking a little more honestly about human relationships and the hardships endured by some women. In conclusion, there are plenty of recollections here, but not much tranquillity.