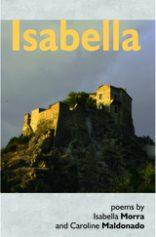 Who is Isabella? Isabella Morra was a sixteenth-century Italian Renaissance poet; Caroline Maldonado takes her by the hand, translates her legacy of work and then, herself, authors a selection of poems alongside Isabella’s poetry. This is a considerable responsibility; the sheer timeslip of centuries, the tragedy of Isabella Morra’s life and the craft of poetry and translation, all of which Maldonado handles with meticulous acumen. Isabella, is wholeheartedly absorbing.

Maldonado lives in London and Italy and is a poet and translator from French, Spanish and Italian. Her previous titles are What they say in Avenale, (Indigo Dreams) and, Your Call Keeps Us Awake, translated with Allen Prowle (Smokestack).

I consult a map, being particularly fascinated by the location of Valsinni (known as Favale San Cataldo until 1873), a small hilltop village, where Maldonado describes Morra spending her short life. Salerno being my southernmost port of call in Italy, I begin to imagine an earnest visceral landscape even further south, surrounding the castle in which Isabella lived and where her honour was violently “protected”; perhaps a ghost even before she was born. Isabella was twenty-six years old when she was murdered.

For Isabella had little free will of her own and Maldonado begins this collection with a comprehensive, concise and riveting introduction of historical relevance and poignant insight.  Maldonado translates from Italian ten Petrarchan Sonnets by Morra which are perspicaciously flanked with the contemporary poet’s voice:

These are followed by three Canzoni; mostly hendecasyllable, their lyrical stanzas and commiato a joy to behold from the hand of a medieval author. This is the whole body of poetry written by Isabella in her short lifetime.

One of many reasons this collection captivates is the tonality Maldonado attains in the seventeen poems of her own which reverently and respectfully accompany Morra’s, always acknowledging her essence and presence. A train heads ‘South,’ and, suddenly, the reader is travelling on a satisfying physical and metaphorical journey:

Precise imagery breathes onto my Italian map together with a relentless sense of exhausted arrival, spanning distance and time:

“Tricarico” is named after a town an hour or so from Valsinni by road which is the birthplace of Italian poet Rocco Scotellaro, previously translated by Maldonado. The poem lyrically tells of how he played a famous Italian hand game, enjoyed throughout the centuries, named morra. ‘Some things remain the same,’ but muses change:

In “From Tricarico to Favale” we learn ‘Pisticci / the town stretched like a white leopard across the hills’; and in “Scirocco” ‘Who will ever hear me?’ asks the poet’s voice, as wistful as the wind.

Poems sequentially skip across pages which want to turn. Not even a sketch of Isabella remains therefore Maldonado describes her in verse. “You say I’m not like the others” is a skilful pantoum, a perfect stifling sensation. “Fava” and “Lemons” evoke succulent sensory experiences to be devoured and savoured. Events can turn menacing, too, In “On my brothers’ return from the hunt” the huntsman

The poet’s manipulation of voice infuses her work with mystery.

As Weissbort says, ‘to be truly enjoyed, the world of literature has to be shared.’ I applaud Maldonado for her gracious sharing, shrewd observation and linguistic skills. This poet has attentively taken Morra’s work, loyally giving the voiceless a vociferous writing life whilst, in solidarity, wrapping her own voice around it.