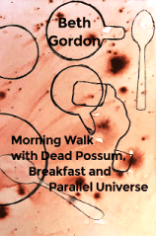 Writing poetry is one way of taking a walk, and reading a collection can be a kind of walking alongside. I was drawn to this book by its title, intrigued by the thought of a morning walk that might encompass such diverse elements, suggestive perhaps of a surreal take on the domestic.

What I found was more frantic than a walk; more of a zigzag flight. Beth Gordon’s poems lay out a troubled journey through time, often circling and returning to worry at the same central images of trauma. At first I found the poems hard to access. They arrive in showers of lists and dreamlike imagery, in breathless sentences that reminded me at times of song lyrics, mid-60s Dylan perhaps. There is a pleasure in simply being swept along. But as a reader, I needed time to try to disentangle and absorb what seems to be happening. Interestingly, the book is printed with a blank left-hand page opposite each poem. I found that helpful, an invitation to take a moment to pause and look more carefully.

The opening piece, ‘I’m Inventing a New Language’ is a cry of distress, a stream of thoughts and memories, some of which seem at first to be randomly snatched from the ether, or to come apart on closer inspection – why are ‘air bubbles screaming//like hunted rabbits inside copper pipes’? And I could not work out what to make of ‘the lingering thunder of Emily Dickinson’s burial gown’ (Dickinson was buried in white; her funeral plans were unconventional; for contemporary visitors, seeing her gown must be a powerful experience; she did write about thunder. But I’m not sure what all that has to do with this poem, or this grief. Perhaps I just don’t know enough about Dickinson). But I found gems here too, for instance: ‘the lilac dust in the back corner of my grandmother’s lingerie drawer,’ a wonderfully ethereal visual and olfactory image that carried me effortlessly to another place and time.

This is a collection that needs to be read as a whole. Certain phrases and events keep reappearing in different configurations, as if the poet is trying again and again to make sense of the broken pieces of a memory (or series of memories) almost impossible to bear. I wouldn’t want to assume that I’ve understood the whole story (and perhaps that’s not Gordon’s intention), but the fragments do start to add up. A child drowns, and/or is poisoned or attacked. A daughter (the same child?) dies as a result of radiation, possibly through living too close to a nuclear test site. There are four years of mourning, followed by the redemptive birth of a grandchild, described with touching clarity toward the last third of the sequence:

There are ‘ancestors labelled murderers’; there are particular murders, the suicide of a stepmother, and murder in general, and the deaths of parents. We might be Eliot’s ‘hollow men’; this might be ‘the way the world ends’ (in ‘November’).There are orphans, ashes, at least one grandmother, a painful separation. Gordon refers to global warming and (often) to mass shootings and atrocities, Columbine, the Vietnam war. There’s a lot going on, much of it nightmarish, the poet’s dismay on a personal level powerfully refracted back and forth and amplified by the wretched state of the world, in a way that is currently all too familiar.

But there are also moments of light, humour and hope. Gordon describes intimacy with great delicacy (‘your cigarette tongue my sweetest moment’), even as she shows how it may be broken apart by tragedy. Music is a constant presence, and there’s ‘Boris the strawberry eating pig’, and toward the end of the sequence, hope that the grandson may

Central to the structure of the collection are five interconnected sonnet crowns. Taken together, they almost make up a ‘heroic crown’ with a modern twist, although the five crowns of three don’t lead directly on one to the next, and the final sonnet is not composed of the first lines of the previous fourteen. However, they are very strongly connected, charting the movement of the collection as a whole. Here, as in other poems, Gordon sifts and resifts particular images and ideas, gradually moving toward a tentative resolution. In Eureka Springs, with its hint of discovery, perhaps a future may eventually be discovered. The poet carries with her the life and death of Zelda Fitzgerald, Asheville and ashes, James Bond’s recipe for martini, the music of Robert Johnson, James Taylor’s time of ‘fire and rain’, and in the final mix, the elements come together to offer some comfort:

I’ve been trying to work out why these poems feel so American, and why at times I have found myself wanting to resist their energetic flow. It’s not just the obvious fact of where they’re set – Arkansas, Mississippi, Asheville (where Zelda Fitzgerald died in a hospital fire), Eureka Springs. It’s much more than setting. Gordon makes frequent use of the oceanic long line and the long sentence, as in Whitman. She incants, as ecstatically deranged as any Beat poet (for example in ‘In Which I Compare My Children to the Apocalypse on a Friday Night’). Her poems overflow with lists, multiple examples, multiple rephrasing. I do know that these effects have all appeared in English poetry too, but less characteristically. Some of the imagery jars on my English ears – I skate past references to witches, mermaids, ‘conjuring’, preferring the powerful originality, for instance, in these lines from the painful love poem ‘Igneous’:

In an interview, Beth Gordon talks about poetry’s ‘power of transformation’. These are brave poems, in which the effect of poetry itself is movingly evident, moment to moment illuminating and transforming loss.