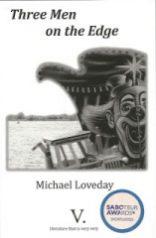 Three Men on the Edge

This book is described on its back cover as both a novella and a “novella-in-flash”. It contains a number atmospheric prose pieces , none of which is more than a page-and-a-half long while most are much shorter. These pieces – which in my view deserve to be called prose poems – are grouped in three sections, each centred on one principal character. These sections could all be said to give the impression of a narrative by describing incidents – some rather inconsequential and some quite bizarre – which include intriguing hints about the background of the main protagonist but do not, in the end, provide much in the way of storyline, explanation or resolution. But even if they are somewhat inconclusive, these individual pieces are often entertaining, engaging and/or moving. What’s more, their open-endedness leaves the reader some pleasing space for speculation.

Loveday sets his quasi-narratives in the London suburb of Rickmansworth which, for one of his leading characters, ‘resembles a delicate wrist-watch, with a built-in tendency to lag behind the beat of time.’ This impression of dislocation carries over into much of the writing which has a dream-like and out-of-time quality. Perhaps indeed Loveday views Rickmansworth as one of those places where an overlooked England truly exists (using the words from Edgelands by Paul Farley & Michael Symmons Roberts which are quoted at the front of the book).

The first section features Denholm, a retired trader in novelty gifts who possesses five landline telephones for different categories of incoming call. (The numbers are given should any reader wish to try making contact!) Denholm is making a table-top diorama out of matchsticks, giving it the provisional title Rickmansworth – An Ideal Landscape. The reader may briefly be puzzled by the information that ‘Denholm’s wife [Joan] found him as a fledgling, listless and transfixed by the begonias’. This however is the other Denholm , a wounded pigeon probably attacked by the neighbour’s cat, Rupert, but now rescued and adopted by Joan with such dedication that ‘Denholm the pigeon vies with Denholm the husband for the position of Joan’s confidant.’ (The reader’s sympathy for Denholm as neglected husband may be diminished on learning his views on marriage – ‘if he’d known, really known, how much marriage is one drowning person trying to push another under, he might not have risked it.’)

Denholm has a friend called Phil who sometimes assists him with his model making activities. The two of them also go for country walks, giving Loveday an opportunity for some well observed descriptive writing. As they throw stones into the canal ‘the surface of the water wrinkles at the centre and little rings expand to the edge.’ Denholm regrets that ‘the ripples he causes can’t be tracked: one glimpse of the whole bewilders the details.’ Loveday likes to use surprising verbs like ‘bewilders’: thus an ice cream van ’loiters at the edge of the Green’ and a laboure,r posing for a photograph, has his right arm ‘consoled by a shovel’.

Denholm’s dysfunctional marriage is further threatened by his odd relationship with his next door neighbour ‘buxom Faith’. He sometimes watches her garden swing in case she might be ‘rocking her body upon it’. But his attentions are very strangely reciprocated: ‘Faith likes to switch on her smoke alarm in the middle of the night to wake Denholm’ because getting him to ’read the electricity or kill her spiders just hasn’t got his attention’. Loveday’s matter-of-fact description of how Faith stage-manages these peculiar four a.m. encounters rather reminds me of N F Simpson’s intriguing plays from the 1950s which achieve their unsettlingly comic effect via straight-faced acceptance of absurd situations.

The second section introduces us to Gus whose life seems relatively empty of incident. He moves slowly and alone through a bleak existence. He appears to be a fairly recent widower and we mostly see him as a lone observer in various landscapes which are sparsely but very touchingly drawn.

In fact we follow Gus month by month through an entire year of wandering his local countryside. January finds him in a snow-covered churchyard where ‘a community of stones stands upright, bold as poked tongues.’ In February he walks around a lake with ‘his wife’s voice accompanying him’. April is perhaps the cruellest month. As he kneels in a meadow, a robin ‘meddles with his thoughts’ (another of Loveday’s unorthodox verbs). And then we get a powerful and original impression of his grieving and disordered mind

Is there a little hint of R S Thomas in that second sentence?

And so the year continues with a sequence of similarly bleak sketches of Gus’s solitary walks. Having taken us inside Gus’s mind, Loveday lets us see outwards through Gus’s eyes: ‘In a car park, trucks and lorries wait to be rescued from disrepair’; the sight of a swan dipping its head below the surface of a lake suggests ‘a mind fathoming for answers’; a lock on the canal prompts the haunting question ‘what is a gateway but a history of exits?’ Sad to relate, Gus seems little better off at the end of the year than he was at the beginning.

The third part of the collection features Martyn. The episodes in his story are all told in single dense paragraphs – very different from the sparse and fragmentary accounts of Gus’s experiences. In one sense these paragraphs suggest that Martin’s life involves more activity; but much of the activity takes place in Martyn’s head rather than in genuine encounters with the rest of the world. His only named acquaintances are Anja, his yoga teacher, and her husband/partner Rob.

Martyn seems to have a crush on Anja – waking up at 4 a.m. ‘he spreads Anja’s leotard across his closed eyelids and loses himself in her forbidden image.’ But any distress this hopeless infatuation causes him is only part of a more generally negative self-image: ‘ the roadworks’ pneumatic drill asks why don’t you find a proper job you workshy tyke?’

One way in which Martyn offsets his internal discontents is by ‘using supermarket items for imagined acts of violence against other customers’ thereby ‘purging the silent rage organically produced by the British when queueing.’ Such pretended violence is replaced by the real thing in when Rob’s ‘post-dinner arm-wrestle challenge’ descends into a full-scale brawl on the sofa. Only when Anja comes into the room do ‘the boys start dusting themselves down, laughing and back-slapping’. Notwithstanding the angst which complicates their relationship, Martyn, Anja and Rob continue to go out as a threesome to a number of places: a pantomime, a restaurant, a snooker hall and, surprisingly, a séance, where the Ouija board spells out E-G-G-E-E-G-X-S, suggesting they are ‘communing with the ghouls of disgruntled poultry farmers.’

Martyn also finds a more sedate outlet for his emotions by working on a series of paintings of the Grand Union canal. But even then ‘a little wildness must be let loose on every canvas.’ Perhaps predictably, Martyn’s attempts to paint pictures of Anja are less successful.

The accounts of Martyn’s troubles run to 36 episodes, making the last section more than twice as long as the previous two. As the above quotations show, Loveday’s skilful blending of the poignant and the amusing is still in evidence; but, for me at least, this last section felt a bit too long and the final pages did not bring very much new development except perhaps a fleeting revelation that Martyn is undergoing psychiatric treatment.

Overall, and apart from that small quibble about the length of the last section, this is an original, well-crafted and enjoyable book. And it is genuinely a book, rather than three pamphlets joined together, because there are interesting links between the sections. Since the main characters inhabit the same landscape, they observe some of the same things and there are pleasing resonances between their different responses to, for instance, the swans and other waterfowl on the canal. Moreoever, although the three main characters are unacquainted with one another, there are teasing suggestions of fleeting encounters between them. Thus Gus spots Denholm and Phil throwing stones, Denholm notices Martyn painting by the canal and Martyn sees Gus kneeling in a field. Among the many pleasures offered by this book, some readers may amuse themselves by looking for further similar sightings your reviewer has missed.