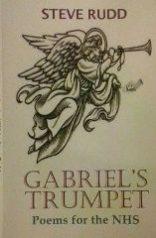 Steve Rudd’s Gabriel’s Trumpet is a book written out of gratitude to the NHS – ‘the eighth wonder of the world ‘as the dedication puts it. And that dedication is complemented by a malediction on all politicians who threaten to harm it. However the poems themselves mostly deal with the personal rather than the political and capture aspects of the experience of a lengthy stay in hospital.

The sequence begins with arrival at A&E by helicopter – evidently this is an emergency admission. The approach from above provides an opportunity to liken the hospital and its many workers to a beehive. Such comparisons may already have been made by other writers about all sorts of large organisations. But Rudd adds his own novel twist as regards the product and purpose of this particular hive which are

I might quibble at ‘cloying’ since health surely shouldn’t be something we feel we’ve had too much of? But otherwise this is a pleasing simile.

That ‘pale carriage’ is another evocative image.

A prolonged stay in hospital can be an unreal experience and is often rendered stranger by side-effects of medicines and sedatives. Sometimes an apparition lasts only a few seconds

In fact the ‘pattern-seeking ape brain’ has simply mistaken a blue curtain for the Virgin Mary! Other fancies are more persistent. Regular night-time doses of morphine often summon Sister Wendy and Padre Pio to Rudd’s bedside. They do not bother him: they are ‘old friends: I can explain them’. More disturbing is the third visitor ‘that bloke in tweed … I never see his face. He’s always / Halfway back in shadow…’ Rudd begins to picture a

Very occasionally there may be incidents where it is harder to dismiss a suspicion of the supernatural. Rudd’s sleep is interrupted by an unfamiliar vision – ‘A Bedouin in full robes … all in white’

A few days later there he is again

Now and then a patient can become a figure in his own fantasy. In the long dark nights Rudd contemplates his room-mate George surrounded by monitoring equipment and then glances through the window at the clouds scudding past and thinks ‘Here we are, flying the hospital / Through the night…’ Truly they could be ‘George and Steve, Pilots of the Future’

In contrast to flights of fancy – drug-induced or otherwise – a hospital’s procedures are totally down-to-earth. ‘Handover’ happens at every shift change on a ward when ‘in a room somewhere, lit by neon, / They are discussing our meds / And vital signs…’ Rudd, however, cannot resist playing verbal games with the process

The poems do not dwell on medical details, staying at the level of ‘I don’t know what my problem is / But I bet it’s hard to spell …’ and being rather dismissive of medical textbooks – ‘ A detailed diagram comparing arses and elbows/ Might have been more use to me.’ The nearest we get to a diagnosis is the wry revelation that ‘my body has been plotting to kill me’ even though

This is a warm-hearted and generous-spirited book. The poems have a liveliness of imagery and a spontaneity unspoiled by being over-crafted. I may have concentrated too much on its humorous aspects (since these lend themselves to easier quotation!) but the collection does include some more thoughtful and serious-minded poems. As a single example, ‘Shepherds’ Purse’ captures the ethos of public service through the voice of a shepherd who has just rescued one of his flock on a filthy night

So much for the myth that “market forces” are relevant to the NHS!

Three Men on the Edge Mary Quant, V & A. Review by Carla Scarano.