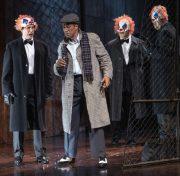 When first performed in 1851, Rigoletto was explosive because of its implied criticism of a corrupt king.

That in turn evokes today’s morally bankrupt politics, where the worst villains get away with any amount of duplicity and almost everyone behaves in way so far removed from commonsense, it ought to be fictional.  The human tragedy is all-the-more agonising because those who fall victim to it are relatively noble.

At the Birmingham Hippodrome stage of the WNO tour, the White House link was rendered dangerously close to farce by a malfunction with the curtain depicting it.

But even that is arguably appropriate and recalls the very first production: Verdi had to thrust the singer performing Rigoletto on to the stage because he was so reluctant to face the public with his disfiguring hump.  The audience concluded his stumbling entry was deliberate.

The assumption was testimony to the assuredness of Verdi’s skill by the time he wrote Rigoletto and to a talent so robust it’s hard for anything to destroy its power.

The drama is deeply layered as classic plot devices, such as overhearing, misunderstanding and mistakes of identity crank up the tension, but it’s the innovative musicality that is the crowning triumph and this production’s voices do full justice to that.

The emotional height of the production is the duet between Mark S Doss’s rich-voiced Rigoletto and Haegee Lee as his perfectly cast pure and pure-voiced daughter Gilda, who soars to angelic heights.  For a sustained interlude of joy, they are happy in the comfort they give each other, even in the bleak wire cage of Robert Innes Hopkins’ set that serves to reinforce our sense of their vulnerability.

No sooner is Rigoletto’s twisted back turned than Gilda is singing another duet with David Junghoon Kim as the dissolute, but honeyed Duke and we dare to hope he might mend his ways.

Instead, he simply gets the best tunes, singing with great swagger, as if to convince himself, and supreme irony “La Donna e mobile” (Woman is fickle) when Gilda is absurdly constant.

At every junction, the characters take the wrong turning, allowing the fabulously deep James Platt as Sparafucile to ply his evil trade.  Any other outcome would be far less dramatic and politically Utopian.