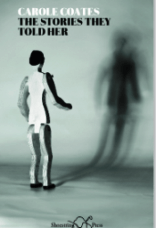 An unsettling surreal atmosphere – perhaps in a fallen totalitarian regime or during wartime –is evoked in the enthralling prose poems of this new pamphlet by Carol Coates. The lyric narrative engages the reader in the fairy tale scenario that a grandmother creates for her little granddaughter. It is set in a world where shops have broken windows, there is no food on the shelves, bread is hard to bite and there are no boots. The streets are empty, soldiers have disappeared and the population is fleeing north. The grandmother patiently waits taking care of the little girl in a landscape that recalls more and more the conflict currently occurring in the Middle East.

To distract her granddaughter from the threatening everyday reality, the grandmother creates a fairy tale aura and an unidentified enemy, a Giant ‘howling in the air’ who is also responsible for the lack of soap and eggs. Nevertheless, she does not despair; she dresses the girl’s doll in a blue satin dress and hopes to make some money selling her own wedding dress made of ‘white silk like spilt milk’ testifying to a prosperous past now gone. She wishes to protect her granddaughter both emotionally and physically but the frightening reality they are experiencing comes out little by little through the little girl’s point of view, which reveals what is going on in this crumbling world. The two protagonists struggle to survive; they are isolated, with little food, bombs are flashing red in the sky and the sewers are collapsing and flooding the area.

A sense of unease and loss is objectively described; it evokes a world where survival is becoming almost impossible, especially for the most vulnerable ones, such as women and children:

Unanswered questions haunt the narrative: “But what is it? What is it for?’, ‘But who are they? Where are they?’. These point out the total unsafety of this frightening reality intensified by a limited understanding of what is happening. They see people leaving, heading to a safer north, probably refugee camps, but the grandmother postpones their departure though they warn her to flee:

This limited point of view builds up a claustrophobic sense of reality conveying anxiety, desperation at times when bombs explode and food is scarce. The emptiness and ruin of the surroundings is both real and symbolic. The church is desolate, ‘the ivy is tangled up and the fern is moving its fronds in the guts that come up the aisle with the rain’ (‘Her grandmother always does the flowers in church’). Destruction is looming, ‘trampling’ on them like a giant with his ‘seven league boots’.

In spite of this, the little girl dreams of a princess Irene who is rescued by her grandmother from the goblins’ caves. She gave the girl a thread to find the way out:

The sheer reality and the world of fairy tales mix in the little girl’s mind, but what is happening in her life is going to be harder, subtler and dirtier. There is a man coming called Max who promises toffee and nougat but offers only wrinkled, dry apples and calls the little girl Snow White. His face is a mask he pulls and stretches ‘sideways and looks quite different’. He wants them to go and live with him by the sea.

In this way, by adopting a restricted point of view and an apparently objective description of the actual situation, Coates’s prose poems present a dauntingly effective perspective of a wartime scenario. The surreal atmosphere is at first unidentified and, at the same time, reflects a real situation we daily watch on the news from war zones. There are no comments or hope; or rather the comments are implied and are left to the reader who is called to witness the story which is not only imagined but is in fact happening somewhere, maybe even now, as the unanswered questions suggest.

While everybody is leaving and dead bodies are on the road, the grandmother goes out but does not come back:

The little girl is completely terrified and short repeated sentences convey her anxiety and fear. If the grandmother disappears or dies she will die as well, either of starvation in the empty house or else hit by a bomb. As in a horror movie, it is the ‘giant’, or the monster, who rescues the little girl. Max is back and takes her to his house by the sea to be his ‘little bride in a white wedding dress on a big feather bed’.

The story lacks redemption; it plainly points out the ruthlessness of ‘true stories’ that have no space for happy endings and reflect a ‘reality’ that is similar or even worse. It recalls what we witness on the news almost every day about refugees who flee their countries because of war, famine and persecutions, because their governments have collapsed and there is no food, no jobs and their lives are at constant risk. Carole Coates lyrically describes this time of troubles and sufferings we can observe from our relatively peaceful world. But even the safety of our world is questioned by the narrative as Coates suggests that this terrible reality is not so far from us as it seems.