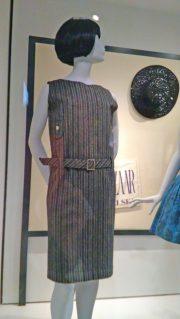 The revolutionary attitude that Mary Quant’s iconic outfits convey strikes the viewer at the V&A retrospective exhibition.  She is considered one of the most influential fashion designer of the 1960s.  She ‘invented’ the mini-skirt (naming it from her favourite car, the Morris Mini-Minor), or made it popular, created the hot pants and the ‘skinny ribs’ sweater, pioneered mass-production to make fashion more affordable and experimented with new materials such as PVC.  She was also a designer, producing household goods that meant to be functional and stylish at the same time.

The first shop she opened, Bazaar in Chelsea, was a great success.  The clothes sold out at the opening and, in a few years, she opened a second shop at Knightsbridge opposite Harrods.  At first, she made the dresses herself using mainly British fabrics, good quality materials like wool and cotton and sometimes adopting traditional patterns such as tartan.  When her brand reached a wider clientele, she employed workers and other enterprises.  Her clothes were less expensive than high couture, which was over according to Quant, in the sense that people were not willing to wear what was considered appropriate but what they felt like wearing.  At the same time, her models were modern and reflected the Swinging Sixties.  Her clothes were targeted to young people who had a better education and higher wages compared to the previous decade or pre-war time.  The economic boom brought more relaxed and liberated ideas in society.  Shopping for clothes became fun and clothes expressed personality, innovative ways of thinking and being that changed according to the new trends, new music and dancing.

Her dropped-waist pinafore dresses with straight lines and short hems, six inches above the knee, meant to be comfortable, easy to wear and emotionally liberating.  Her dresses mainly showed the legs, though not the cleavage, as had never happened before which did not flatter curvaceous forms, as Dior’s dresses did, for example.  It was a new kind of sexiness that empowered a different vision of woman linked to the second wave feminism.  It encouraged girls to play with fashion and consequently with the image of their bodies, and above all enjoy life.  She promoted a kind of androgynous childlike figure, a tomboy in transgressive competition with the dominant male society.  The exhibition well explains this view with a wide range of outfits, focused captions and interesting videos.

Quant mocked institutions disrupting their rules but also referring to them in some of her dresses as in the ‘prude’ series, in the astonishing red Welsh wool evening dress (1964) or in the black Columbine dress (1964).  She thought that fashion was not superficial but an important part of life and of being alive.  For her, it was a way to express oneself, out of restricted and constrained roles.  As some of the videos show, her catwalks were unconventional as well.  The models danced, undressed themselves or smoked a cigarette during the show.  Jazz and rock music were on and free drinks were offered.  It was totally different from the traditional catwalks featuring young women in tight models or large gowns with coiffured hair parading in elegant halls.  Her idea of fashion was fun, entertainment, a game to play together.  It was also a way to shape identity which was permutable, changeable according to individual mood and trends.  Therefore, fashion became a way to question roles and rules according to the transgressive attitude of the 1960s, in order to create alternative identities young people could express through their clothes in a playful way.  It was transgressive but also aesthetically pleasant.  Her inventiveness not only applied to models but also to colours and materials.  Hues such as prune, ginger, grape and scarlet reflected the vitality and unconventionality of the time and the use of wool jersey in bright colours or PVC for rainwear were revolutionary.

Quant’s successful brand widened its range of goods in the 1970s and 1980s producing all kind of products such as stationary, socks, stockings, dolls (the Daisy doll), toys, carrier bags, lingerie, boots, sunglasses, perfumes, and especially cosmetics (Mary Quant Cosmetics LTD).  She introduced the waterproof mascara and cartoon strips with tutorials that explained step by step how to do the make-up.  This idea was very popular and the product was cheap.  The kit provided a paint box as well where you could mix colours and therefore be creative in your own make-up.  Her bobbed hair style was also unconventional for the time; it was inspired by the 1920s with a straight fringe and geometrical lines.  You definitely needed straight hair and well shaped long legs to follow her style and look good at the same time.  The brand made profits from large sales, according to the mass-production rules, raising 4-5 million pounds per year.

Her style was apparently simple but actually implied a great expertise both in clothing, in fashion and in the use of materials as well as business acumen in the consumerist world.  Her revolution was more finalized to attitudes than aiming to a political overturn, following the trends and the new opportunities offered by a wealthier middle class.  This was a situation that changed in time and to which Quant was able to adapt successfully in its different phases.  Her work still conveys a sense of freedom undoubtedly linked to her time but also to her innovative creations still vital, modern and liberating today.