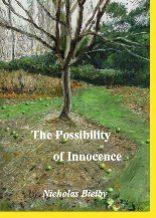 Poetry Review – The Possibility of Innocence. Jefferson Holdridge takes a measured look at a collection of thoughtful poems by Nicholas Bielby

In Nicholas Bielby’s newest volume, The Possibility of Innocence, the question of faith underlies many of the subjects (death, birth, grief, joy, aging, or nature) of this deep, formally adept, humble, and engaging volume. In the poem entitled “Faith” Bielby outlines the complexity of his thought on the subject:

Such a commitment is important to his personal poems to friends and family, as well as to the poems of faith and philosophy, and, of course, art. Even his nature poems, which often strike a pained note at the merciless efficiency of nature, from the sparrowhawk to the fox, there is a sense that experience can be raised to a higher form of freedom. Freedom is not so much an empirical experience, a freedom from or freedom to do, but it is the freedom to imagine, one that moves creatively in the space between the transcendent and the immanent, between the eternal and the temporal. Or, it is not so much freedom for the hunter or the hunted as it is imaginative freedom from the hunt. It may spring from grief, but it flowers in ecstasy. In that way, the aesthetic is again like religious experience. The agency is not only faith, but poetry which, for this poet, is a fundamental gesture of faith. The apple tree may “drop its abortions ruthlessly” but there remains the possibility of innocence. “The early worm…eats of the apple with blameless innocence.” In the end, the poems are “windfalls… happenstantial things / we try to polish into fruit with wings.” The cover painting (by the poet himself) shows the beauty of newly fallen (because uneaten not yet rotten) apples on the ground, and highlights the poetic ideal. The opening poem, “after” one of Rilke’s Sonnets to Orpheus, introduces this idea of poetry as enchantment and praise from the start.

The volume does not walk steadfastly down this pastoral path, however, not without acknowledging the troubles of life. Translations from Baudelaire and Heine make sure of that: we move from “paroxysm of pain” to “vipers in the heart.” Many of Bielby’s poems have multiple colorings in order to show the complexity of the possibility of innocence and what is required to make that possibility come true. In the title poem, “The Possibility of Innocence,” dedicated to the academic Stephen Prickett, friend to Bielby, the concept of innocence is given philosophical grounding:

Similarly, in “Jane Austen: Regulating Hatred,” he captures how that novelist avoids bitterness:

The rising above is what Biebly puts his faith in it seems. His Irish and Native American poems are more mystical, but not hazy.

Bielby has many exemplary personal poems to friends and family, each successful and carefully wrought. In these poems, there is a sense that friendship and family have certain obligations that are nevertheless liberating in the new dimensions they give to our lives. In “The Covenant”, written to his first grandchild Jessica, Bielby captures this beautifully, even framing it within the tensions of the two sides of a family itself, and thereby acknowledging both the inherent tensions and beauty of the birth:

His poems on Italian places take on a more physical power, as if the sight itself were palpable. In the sonnet, “The White Cattle of Umbria” the cattle arrange themselves “sculpturally” so much so that later he “sees them still …standing or lying on the hill.” Another Italian sonnet, “Passeggiatta in Siena” measures this palpableness against the metaphysical light of death. A young man clears the way for his old father to see the “svelte limbs” of an acrobatic woman, but the poet asks: “But does the old man care…who scarcely sees or lives / under the wheeling curved assassins’ knives?” Bielby is not afraid to measure his own life against such significance. In the poem, dedicated again to Prickett, entitled “Tidying up my Study,” he sums up his own life unsentimentally:

Though selling himself short, perhaps, he acknowledges with humility and a Miltonic reference, the importance of a minor position in art and life, as in religion. “Each touch is both hail and farewell,” he writes in another poem and this is not just true of physical touches, but poetic ones as well. A gesture of faith in itself meant to touch the willing reader.