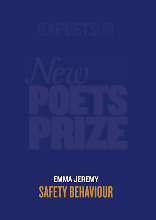 In Safety Behaviour, Emma Jeremy takes an idea and follows wherever it goes in her mind, finding associations, absurdities and complications. Then the poem embodies what she’s discovered and tells its story, bringing the reader inside the world she’s found.

There are few of us who can catch those glimpses of the bizarre and let them come to life on a page. And while many of the poems come from that source of imagination, these glimpses become tactile, sensual, visible in the poet’s hands.

The title poem appropriately takes us into the territory of the thoughts which can be dangerous, and the advice to put them ‘somewhere else’. Where might that be? The poem takes off into a string of possibilities, putting them ‘on a roof’, or ‘in shoes I never wear’. The thoughts become real enough to be objects which can fit inside others, which can travel:

The poet becomes in control of the thoughts, manages the intention to dispel them from the mind in ways of increasing complexity. They drown, fly off, evaporate, swim. They lose their power, and finally

That ‘no’ allows the reader into the process of the poem, the process of exploring its images and power. The thoughts are transformed into nourishment, pleasure, a gift for everyone. We don’t know the nature of the thoughts, it’s not important to know, but each of us may have our own experience to connect to in this poem. And that means we can also experience the process and the transformation from danger to deliciousness.

The dangerous thoughts are revisited in ‘Trip’. With one word hanging on each line, there’s time away by the sea, to

Rather than the internal transformations of ‘Safety Behaviour’, in ‘Trip’ the poet can go back to this real place in her mind when the thoughts come,

This image of the sea’s hand feels perfect and at the same time fresh and unexpected.

Peeling an onion becomes a three-page poem without punctuation, flowing through the story it tells. In ‘There’s something I want to get off me’, an ordinary onion becomes strange, sinister, and the poet feels it will mark her with its smell for ever. In this context, the onion’s smell feels like the thoughts which can’t be escaped. The language is simple, easy to absorb, like a friend’s voice telling the story of what happened yesterday.

Childhood memories take on a different flavour. ‘Sister’ follows a memory of moving house, the exploration of a new garden and the plant which has moved with the family, settling behind the big bush ‘which swallows tennis balls’. Everything is fresh and new. Tinned spaghetti ‘dribbles down your chin like it’s trying to crawl away’. In the third and final stanza we move on, looking back from four years later, when the hopes of the move will have shattered, and the garden will be untended. But ‘the plant that followed us will have flowered, / believe it or not’. I wondered what the plant means, what has flowered when everything has changed, and I didn’t need its name.

In ‘Let’s Just Call It What It Is’, childhood becomes a series of tastes in the mouth, from cake to ice cream and raw cake mix. But the poem takes on a darker shade when

‘What it is’ is never named in the poem, but

One of the poems’ strengths is not to name everything, the tastes, the thoughts, thus leaving the reader to feel out their personal resonances through the language and the images.

Sadness, difficulty, perhaps depression and loss of meaning are explored in these poems within these fresh images and imaginings with a lightness, a freshness which balances them and reveals them too. But there are hints that in this family people skirt round pain. In ‘Reveal’, every line after the first two is end-stopped, and there’s a heaviness to the lines which expresses the feeling of the poem:

I enjoyed reading these poems several times to uncover the strength of the writing. The simple words and structures reveal complexity and a lasting depth.