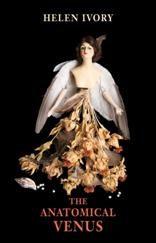 I quickly learned when reading this collection, perhaps to my shame, that I am not as well-read as I should be on the topic of the historical abuse of women. Sure, there’s been plenty in the media in more recent times and the #MeToo movement has been a stark reminder that we have to remain vigilant. Helen Ivory’s collection harks way back to times when women were falsely regarded as witches and demons simply because of physical characteristics such as menstruation and fertility. The many biblical references in the collection remind us, if we needed it, that since the very first woman we were destined to be seen as a cause trouble and to get the blame for just about everything.

The first poem in the book begins, tellingly, with a quotation from Exodus 7:11, “thou shalt not suffer a sorceress to live.” This immediately begs the question, what is a sorceress? and sets the scene for an exploration of the links between witchcraft and carnal lust. The reader is struck by just how deeply in our culture there is embedded both a suspicion of women and also a reliance upon nature for our health and wellbeing. Whenever the normal course of events is disturbed, it seems a woman is accused of meddling with dark forces.

There are poems that reference nursery rhymes and religion, all featuring helpless women and the curses they bring. There are poems about the fascination of strange objects, about early medical and psychological experimentation, and about women constantly being forced to be the versions of themselves that are dictated by men. In ‘The Fainting Room’ Ivory uses the metaphor of the dangerously tight corset to shock us with her line, “nobody heard the crack of rib”, and in ‘Venerina’ we are introduced to the book’s title topic of the anatomical Venus. These doll-like representations, modelled on the human cadaver, were supposedly created to help in the study of medical science, but just how they were researched can only point to some pretty awful practices.

Ivory includes a number of poems looking at the horrors of early medicine. In ‘Cunning’ we are reminded that obstetrics was a messy business. Whilst a woman might look to nature, “the hedgerows are her pantry to quicken labour”, the male physician who was brought in to assist with the birth of a daughter was more likely to “rip off her head with forceps.” In ‘Dissecting Venus’, The man stealing bodies on which to experiment finds “the first cut seeps blood like Windsor soup. He was expecting more.”

Other poems rage against the stereotypes women have become: ‘Baba Yaga’ the supernatural, deformed woman of Slavic tradition, is modernised with her shaved legs and shaped eyebrows; ‘Poppet’ the contemporary version of a small figure used in sorcery, appears as “a pin-up starlet with a bra wired for witchery.” We find too the images of women drowned or dunked in water like Ophelia. In ‘By Water’, hysteria and insanity are cured by immersion “until derangement shudders out of her.”

Ivory describes the domestic slavery of women such as ‘The Parlour Maid’ and ‘The Housekeeper’ who clean and scrub, and depicts the tragedy of a woman who can no longer bear children “her body, a valise, is unpacked and put away.” Women are dolls, bitches, reformed, silenced, sluts, vessels. In ‘The Hanged Woman’ we read the accusation “you said my womb knew such hunger that I might devour a man entire”, and in ‘Scold’s Bridle’ “the root of me is driven down to silence.” The reader is forced to face the centuries of misunderstanding and mistreatment of women, the realisation that women have for so long been nothing but mothers and providers, “she cooks and she mends, sings them love songs until she is dumb.”

It is only in the penultimate poem that Ivory allows herself some anger and the possibility of a fight back. I felt an echo of Tishani Doshi’s The Girls are Coming Out of the Woods in ‘Anger in Ladies &c’ which states “the ladies are rendering themselves contemptible…they are sharpening their bread knives.” Of course, the reader can sense pent-up anger throughout, but it is confined like a deep secret until this moment.

This collection is a rich exploration of the vast difference between men and women at a time when gender definition is becoming blurred and contentious. Ivory reminds us of our hard-won victories and how tricky it is to throw off the historical connotations and burdens of our sex. These poems, at times using archaic language and referencing fixed misconceptions, form a sort of Wunderkammer of precious specimens for us to gaze upon in amazement. As with any cabinet of curiosities, the contents are both beautiful and intriguing, shocking and bizarre, but most of all a reminder of attitudes and practices which should stay in the past.