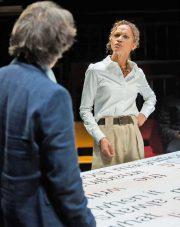 Once upon a time in Britain the drama of a journalist arrested for telling the truth about a government would have been experienced as a troubling but remote account of an alien regime.

As we lurch towards another election through “a firehose” of fake news, to borrow an image from Can Dundar, one of the upsides of our turbulent times is a heightened awareness that politicians almost anywhere cannot be taken on trust, democracy is broken and critical thinking has rarely been as essential.

In the Arcola’s first co-production with the Royal Shakespeare Company, the resonance of a true story about footage relating to Turkish State Intelligence sending weapons into Syria is all the greater because the theatre was founded by Turkish-born director Mehmet Ergen and its location in Hackney is at the heart of one of London’s Turkish communities.

The busy world is pared back to a cast of three and the trappings of so-called civilisation are reduced to hard surfaces far removed from nature.

Charlie Cridlan’s design is dominated by a white, metal structure on wheels that begins as the newsroom planning table and morphs into the unyielding beds of the prison cell, or bijou apartment with en suite toilet-cum-shower-cum steam room, as described by Indra Ové in her short stint as an estate agent in one of the play’s lighter moments.

Ové and Jamie Cameron between them cover a range of parts: wife, grandmother, son, fellow journalists and officials.

Peter Hamilton Dyer takes the hugely demanding role of Can as he is wrenched from his “very normal life” with wife, son and dog Cinnamon into a world that however unacceptable is surprising in its compensations.

The acting is striking in its low-key portrayal of the protagonists as essentially normal, warm human beings, capable of ingenuity, braveness and generosity.  They are the norm, not the tyrants.

The nobility shines through as Can enjoys the comforts of a special inmates’ cheese toastie cooked between the bars of a radiator and apples and hot tea thrown into the prison yard, his appreciation sharpened by deprivation.

As a writer, Can also admits his ordeal gives him an international platform of which many in his profession can only dream and the authority to produce the book that inspired a play that speaks powerfully to our age and is a triumph over his oppressors.