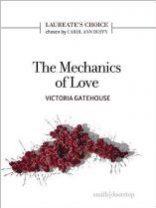 Victoria Gatehouse’s The Mechanics of Love is a series of vignettes that loosely follow a rite of passage from teenager to young woman and parent. Not all the poems focus on a first person narrator though, which shows the poet’s willingness for engagement beyond the personal.

The seductive advertisement for a brand of perfume is examined in ‘Poison, 1986’,

The schoolgirl is ready to explore a darker side of life and expand her knowledge beyond the safety of school and childhood. She acknowledges that the success of the advertisement doesn’t only lie in the perfume, but what it represents: the dreams and lifestyle being sold by the brand. The reference to ‘thirty seconds’ and ‘schoolgirl reek’ though suggest that the schoolgirl knows it’s only a fleeting sensation, a brief window of being someone else before returning to a more mundane, regular life.

Scent is also a feature in ‘Walking the Boulevard’ where a transvestite checks his reflection in a mirror,

This man is staving off grief by dressing in his late wife’s clothes and using her make-up. Here the scent is not seductive but represents bereavement. This isn’t someone trying to look pretty, but someone trying not to lose someone else’s essence.

‘Pearl Daughter’ becomes a prayer from a mother to a daughter,

A prayer for a son would probably not involve a worry about ‘octopus lovers and sharks’. This one is a wish for a daughter to survive against the odds.

The umbilical cord is the subject of ‘Cord’, which starts

Although the snake is a rather predictable image (and not the best the author is capable of) the poem ends strongly,

The cord that sustained life for nine months becomes another memento.

Victoria Gatehouse has a light touch and uses accessible language which nonetheless has layers, giving the poems depth. She shows empathy, reaching out beyond the personal narrative. The rite of passage approach gives the collection coherence and an underlying narrative arc. Each poem feels as if it has been placed with consideration for how it relates to its neighbours. The Mechanics of Love casts an analytical – but ultimately approving – eye over humanity.

Anthem for Lost Youth As You Like It, RSC, Barbican. Review by Julia Pascal.