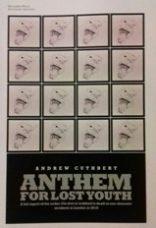 This book describes itself as “a full report on the under-25s shot or stabbed to death in non-domestic incidents in London in 2018”. Each page is devoted to a single incident and contains a newspaper style description of the circumstances – names, time and place – together with a kind of meditation based on these bare facts. Andrew Cuthbert calls these meditations ‘newspoems’ and says that they combine the lyrical with the factual in the form of “fleeting thoughts to carry the reader across space and time.”

Cuthbert explains that his motivation for commemorating 51 tragic deaths (mostly of young men) in this way is a sense that traditional journalism has failed because it has tended to shrink human actions and reduce complex characters to a single dimension. He is therefore seeking a newer form of reporting which encourages readers to recognize a common humanity that extends to those whose lives (and deaths) are at first sight very different from their own. Cuthbert’s “fleeting thoughts” in response to the cold facts of violent death could be seen as a model for the rest of us to follow as we read all-too-frequent accounts of the disasters which afflict other people’s lives.

To those who might accuse him of “cultural appropriation” in presuming to write about young people who for the most part do not belong to his social or ethnic group Cuthbert’s reply draws again on the same powerful idea that our common humanity means that we can all share a perspective on these sad events.

So much for motivation and justification. What does the book achieve? At the most basic level it raises awareness. The bare reports of each death – usually in fewer than 100 words – gather together news items that most of us will have missed and hence face us with specific stories which give more substance to our generalised (and dehumanised) knowledge of the regrettable existence of “knife crime”.

But what do Cuthbert’s meditations/fleeting thoughts add to this? At their best they stir a flash of insight or empathy. The reality of death from loss of blood is well summed up by the observation that, for the probable instigator of a fight, “punishment is the 22 minutes between wounding and dying.” Alongside the shortest news item about a young man, of whom nothing seems to be known except that he took a week to die in hospital from gunshot wounds, Cuthbert simply asks the poignant question “Did no one come to visit you?” And on learning that police offers spent time at the scene trying to save the life of one victim Cuthbert reflects that the wounded teenager had put himself in the hands of the law “for possibly the only time in his life.” One wounded man is dropped off at hospital by a companion on a motor scooter. “Hang on the rider shouted. Didn’t want to lose you, couldn’t risk staying with you.”

Sometimes Cuthbert’s responses are based on more than the written texts. In some instances he seems to have obtained access to witness statements which didn’t appear in the press reports. Some of these are quite telling. A policeman “bemoans that nowadays the knives go in repeatedly. Not the single point that might have been made five years ago.” In one case Cuthbert has been able to get a sight of some CCTV images and begins his newspoem with “Hurry up Harry, they’re closing in on you.”

From time to time the meditations give small clues about social history and the changing nature of communities. One victim lived on an estate “built 80 years ago when West London was Britain’s dynamic manufacturing region, which you likely knew nothing about.” Hinting at explanations is appropriate, but Cuthbert tries to steer well clear of judgmentalism. When he does permit himself to comment on lifestyle he sometimes hits a promising poetic vein

With so many, superficially similar, incidents to deal with, Cuthbert sometimes struggles to find observations as apt as those quoted above. Once or twice he resorts to a kind of rueful humour: a killing which occurs in an untypically upmarket area of the city is described as “more Waitrose than Iceland.” But the use of word-play and grim incongruity doesn’t always come off. Nevertheless, even with a few mis-steps, this verbal journey through a year of senseless killings and wasted lives is a powerful and thought-provoking piece of writing – especially if taken in a single sitting.