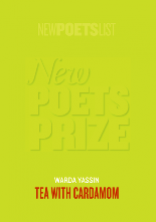 I was delighted by this pamphlet. In the short space of twenty luminous poems, Warda Yassin gives voice to her own unique take on life in the UK as a young Somali poet. The poems are a joy and a revelation to read – uncluttered, often infectiously playful, and also ready to confront tragedy, cruelty and injustice.

Yassin is based in Sheffield, a member of the Hive network and The Writing Squad. One of the first qualities to strike me in her imagery was a celebration of the cultural mix and muddle to be found in a multicultural city. In “Victoria Street’”,

Every poem appeals to the senses; I’m left with a particularly strong impression of the scents, tastes and colours that Yassin associates with her culture. In the poem set in Burco, a city in Somaliland, ‘girls wore jilbabs like amythests against/the Maghgrib sky.’ I especially like “Small Talk”, in which the poet meets a fellow Somali on Blackfriars Bridge, and compares the pleasure of recalling her country and its ways to wearing a traditional party dress:

To me, there is also a sense of longing in these beautiful images. A mother losing her son to armed conflict is left ‘serving tea without cardamon’. In another poem, the scent of an absent man, ‘the scent welling inside /the new suitcase, its unworn shirts’ is linked to ‘the frankincense/she has wafted through years of houses.’

Yassin quite often portays women waiting for men or boys, perplexed by men’s aggression (‘How did they teach you/to unthread the ropes of her heart?’). There are women bereaved or separated from fathers, hus-bands or brothers, boys drawn into gang warfare. Yassin tells of learning the Janazah, the funeral prayer. Yet the poems convey strength even in the expression of grief, and an ability to move forward. In “At 57”, the intensely lyrical final stanza considers a missing husband’s books:

This strength seems to grow as one reads through the poems. Yassin is aware of and confronts wrongs stemming from colonial and post-colonial history and civil war, but also stands up for her right to be contradictory, even light and frivolous, as in “Facts and Trivia”:

In the marvellously assertive “Blick”, a ‘revolution’ of a poem written with great verve, she showers us with positive images of blackness, among them: fresh tarmac, a night sky, ‘my father’s village after rain,’ the safety of ‘kinder shadows’ and of her mother’s arms.

There are many more poems in this collection worth relishing and rereading. I love the way it ends, with an account of “Searching for My Father’s Tree”. This seems to me like an enactment of her mother’s advice on how to say the funeral prayer (‘you can use whatever language you like’), a process in which tradition and inventiveness combine. This poet is both skilful and forthright. She knows when to hold back and when to be open-hearted. Her father’s tree has ‘small cuts/like sun-dried lips speaking his name’, and the poem and collection end with an irresistible acknowledgement of love:

On every page, this pamphlet had something to teach me about Somaliland and Somali people; but more than that, it offers a taste of an impressively sure-footed new talent. Above all, Tea with Cardamom gives me hope – hope that the latest generation of poets working in the UK will spring surprises, while keeping informed eyes on poetry’s wide-ranging strands and traditions. Warda Yassin is a very deserving winner of the Poetry Business New Poets Prize. I feel sure that even now she’ll be working on her next harvest.