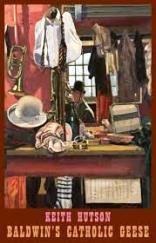 Baldwin’s Catholic Geese is a substantial book: 118 pages of poems and 10 pages of notes which reference each poem. Nonetheless, what reader would not be seduced by the enchanting title? Add to this the marvellous cover, ‘Comedian’s Corner’ (1932), painted by Harry Rutherford with its colourful array of costumes and contraptions. a device which looks like shackles, a white derby hat, and a large brass horn without a mouthpiece, not to mention a rosy comedian smiling in the background.

I am coming late as a reviewer to this collection – which was published early in 2019 – and I am already preceded by a list of ecstatic readers with pedigrees more imposing than my own. Andy Croft, of ‘Morning Star’ describes it as ‘a hugely entertaining celebration of British music hall and variety artists.’ Carol Rumens in ‘Our Daily Read’ notes ‘this collection delivers the comedy and oddity its title promises, but it amounts to very much more than a novelty act.’ The most comprehensive and fulsome praise I have read comes from Steve Whitaker, literary correspondent of the Yorkshire Times. Whitaker gives a generous nod to Keith’s professional background as a television scriptwriter and poet ‘moulded through the refracting glass of youthful memories,’ commenting that ‘the man who grew out of early obsession and the world of television is well placed to make meaningful judgement on all our behalves.’ He concludes that, ‘There’s more than artistry to Hutson’s peerless volume.’

First off, the sonnet is Keith Hutson’s playground. I set myself the task of counting the number of sonnets in this book as compared to poems of other forms/lengths and tired of the exercise before I’d finished. It’s safe to say, that most of the poems in the book are 14 brilliant lines long. As it happens, the opening poem is not, though the sense of mastery emerges as the poet offers advice to someone, probably a theatre manager about who to hire to open the show:

As someone who has trodden the boards, looked out on that ‘house’, every word rings true. But let the sonnets begin, each one a short biography of a music hall performer. Joan Rhodes (1921- 2010), who

Apart from the genius of the image, what a volte! But turn and turn again, in a list of performers where freaks of nature find stardom on the music hall circuit, in “Immense” (i.m. Little Tich 1867-1928), Hutson scores again. Beginning with six lines of pathos, he finishes with:

Addressing one of his subjects in the context of a perennially relevant issue, self-starvation, the poet compares Giovanni Succi 1853-1905 to Frances Thomas 1935-1978, probably the poet’s own aunt:

Hutson’s glitter-ball stage is tawdry and tarnished, but still gleaming, as over and over he blends humour, irony and pathos, managing to be poignant and sassy at once. The school bully, becomes an act as ‘Town Crier’ who

And what of Old Mother Riley? I love the way he turns the humour of humiliation, always uncomfortable to watch, into tragic irony:

For me the revelation of Charles Aznavour is perhaps the most heart-breaking with its opening question to the reader:

‘Edith Piaf’, the poet reveals, lent President de Gaulle her handkerchief’ as they listened together to the song in celebration of the European Union. Given what is happening today to the European Union, perhaps it should be played on every radio station, but the closing tercets of this poem sent me to my handkerchief with its ring of truth and humanity:

This one is not a sonnet.

I cannot recommend this book too highly. If you have not lived long enough to have experienced vaudeville/music hall theatre, or to have heard your grandparents rave about it, you can read it all here. The artistry of Keith Hutson. nuanced, never forced, brings it back to life again. Be sure to look sharp though; beguiled by the characters, you may lose sight of the craft, the genius blend of pathos and humour threaded through every poem. Read it.