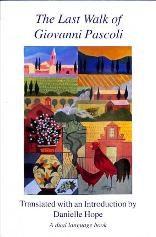 For those who know little or nothing about the Italian poet Giovanni Pascoli (1855-1912) this book begins with two very helpful biographical sketches – one by Danielle Hope herself and the other by Franco Toscani. This bilingual edition features all sixteen poems from the sequence “The Last Walk” and the collection is rounded out by a couple of extra poems, of which “The Dapple Mare” is by far the more interesting (and will be discussed later).

Fifteen of the poems in “The Last Walk” are ten-liners while the sixteenth has twelve lines. All the poems offer evocative snapshots of scenes or people or places observed during a stroll in the countryside. The same form is used for the first fifteen: a pair of three-line stanzas followed by a quatrain. In the originals there is a strong rhyming scheme: ABA CBC DE DE (and for the record the sixteenth poem adds an extra couplet with rhyme scheme EE). Since rhyming is so much easier in Italian than in English, Hope does not attempt to imitate this aspect of Pascoli’s work and – at best – makes do with half-rhymes.

Given my rather limited knowledge of Italian I do not expect to be able to say much about the accuracy or sensitivity of Hope’s translations and for the most part I will take her versions at face value and comment on them as pastoral poems written in English. Let’s take the first poem “Arano / Ploughing” as a more detailed case study, however, and see what I can manage to uncover about the relationships between Pascoli’s words and Hope’s. It will be helpful to quote the middle verse in its English form:

Hope has succeeded in enhancing Pascoli’s repetition of ‘lente / slow’ and gained a pleasing effect of alliteration and assonance by choosing ‘calls’ to match the word ‘cows’. Hope also scores points for picking the unexpected verb ‘thwacks’ rather than the more obvious rendering of ‘ribatte’ as ‘beats’. I very much like the ‘patient hoe’ – and that is something Pascoli himself can take the credit for. Hope’s inventiveness selects an even more unusual word in the final verse when a robin’s song ‘chinkles like gold coins in the hedges’; and in the first stanza she chooses a suitably soft-sounding word to replace the more literal and spiky ‘thicket’ when she tells us that ‘dawn fog / rises like smoke from the brushwood’.

In this first poem we can already see the main ingredients of all the others – an element of scene-setting description followed by the appearance (in varying order and with varying importance) of people and/or animals and/or birds. The cumulative effect of reading the sequence is indeed rather like the experience of recalling particular momentary observations made during a country walk (and why is it that certain specific points on a journey can leave a very clear impression while most of the sights and sounds coalesce into a generalised blur?)

For the rest of the poems I shall not even attempt the mild dissection of Hope’s translation that I performed with respect to “Ploughing”. Instead I shall simply make comments on some of the English versions which, for one reason or another, particularly stood out for me. It should be assumed however that Hope’s skilfully creative interpretations of Pascoli’s text are in evidence throughout the sequence.

“From Above” describes a skylark’s view of a landscape in which I particularly like the reference to a manor house that ‘spools out smoke’. I am not sure however that I really believe Pascoli’s simile which Hope renders as ‘clumps of turf / glow as bright as sunshine in a mirror’. From where I usually stand, turf seems pretty light absorbing!

“Hens” presents a useful lesson on living in the present. A housewife – ‘unlike us glum fools’ (which presumably refers to the too-cerebral attitude of poets) – is made content when she ‘hears the sound of her useful hens’ clucking’ and reflects that her household is well-resourced. But I find an interesting ambiguity when the last verse says ‘girls with wistful eyes croon ditties’. This echoes the earlier mention of useful hens and, for me, brings back a childhood memory of the gentle and questioning noises that chickens make to themselves as they potter round the yard. But does the poet actually mean us to picture chickens again? Or is he now describing the household servant girls at their work?

While the overall tone of the poems is timelessly rural, “The Iron Road” acknowledges the intrusions that railways made into the countryside during Pascoli’s life. The track ‘stretches away in a straight / burnt-brown stripe’ and alongside it ‘telegraph poles stilt in the pearl air’. I rather like the use of ‘stilt’ as a verb; but in this case I think the literally translated word ‘pearl’ is not very helpful. Hope is soon back on form with her word choices, however, in subsequent poems: some distant bells sound ‘muffled behind an absent-minded veil’; we learn of that day when ‘exasperated swallows squawked’; addressing the carter, ‘trudging softly through nightfall’ in order to deliver winter fuel , the poet realises that ‘later you slept cradled on your coal’.

And all this goes on while ‘blackened carriages rattle past / right before their indifferent eyes’.

“She calls you” is a poem made (too?) complicated by being built around a parenthetical statement which covers seven and a half of the ten lines! It ends however on an evocative image of parents of troublesome children who, when ‘praying together, / stifle their heartaches under the sheets’.

After this fairly thorough run-through of poems from “The Last Walk” we come to the longer, and perhaps innocuous-sounding, poem “The Dapple Mare”. This relates to a grim incident in Pascoli’s childhood – the murder of his father! He had left home in his horse and carriage and subsequently encountered some kind of ambush. Thus it was that the same horse and carriage later returned to the house carrying its dead or dying owner. The poem largely consists of Pascoli’s mother talking to the horse some time after this tragic event.

Pascoli’s poem was used as the basis of a 1953 film Cavallina Storna in which the horse actually avenges its master’s fate. It is to Danielle Hope’s credit that she renders this rather melodramatic piece into measured but quietly moving English. Indeed my reading and re-reading of the whole book confirms my feeling that she has worked painstakingly but unobtrusively to do justice to Pascoli’s work while causing it to fall quite naturally on English ears. Congratulations too to Rockingham Press for this well-made volume with its colourful artwork by Frances Wilson.