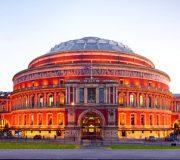 One of the main reasons to stay in London in the summer is the Proms.  I admit that I am in love with the Royal Albert Hall.  There is something about sitting in this circular, wedding cake structure that has an effect on the psyche.  Over 5,000 people coming together to absorb a musical event promotes a sense of community.  What do we all have in common- a love of music.  Inspiring.

My selection of what to see at the Proms is arbitrary.  I want to hear classics but I also want to know new work that I will never otherwise experience.  Jonathan Dove’s We Are On Fire (Prom 43) was a world premiere and is what Dove calls ‘joyous and tribal’ as a 90th birthday gift to the BBC Symphony Chorus.  I loved the use of repetition and call and recall between male and female choirs

This unaccompanied choral work, with text by Alasdair Middleton, is provoked by Dove’s own philosophy.  He is interested in humans not being different ‘races’ but being from the same African source.  Repetition of the phrase Red River connects the blood that unites us.

It is a shockingly beautiful work that has a dynamism and purity which instantly engages.  It is only ten minutes.  As soon as it ended, I wanted to hear it all again.

Prom 43 was crowned with Beethoven’s Symphony No 9 in D minor, Op.125 ‘Choral’ – known as the European Anthem-the Ode to Joy.  Soprano Anu Komsi, contralto Hilary Summers, tenor Michael Winius and bass Mika Kares were well served by the BBC Symphony Chorus and Orchestra.  I half expected the audience to be waving European flags in the last summer before we leave the EU.  This would have been a poignant celebration of our bonds with our European cousins.  However, unlike the Last Night of the Proms, not one flag appeared.

Prom 42 offered two works by women composers that made me sit on the edge of my seat.  Sandwiched between Beethoven’s Symphomy No1 and Shostakovichs’s  Symphony No. 1 in F minor, Clara Schumann’s Piano Concerto revealed Schumann’s wife as an original and compelling artist.  And Sofia Gubaidulina’s Fairytale Poem, though only ten minutes, packed in a hugely atmospheric and almost frightening that deserves more attention.  Gubaidulina was prominent in Soviet Russia and was overshadowed by Shostakovich’s reputation.  But it is hard not to see the marginalization of these women’s work as part of a larger creative impulse that considered women who dared to create music as peripheral.  Bravo to the Proms for highlighting what we have been missing.

Michel Schönheit is the only permanently employed organist in any German concert hall.  The first half of Prom 47 was devoted to his virtuosity as an interpreter of Bach.  Although  Schönheit ‘s celebration of Bach’s range was stunning, I found the most touching work to be his interpretation of Bach’s Cantata No. 1146 Herz und Mund und Tat und Leben known in English as Jesu, Joy of Man’s Desiring.  Written in 1723, this has a bitter-sweet memory for those who heard Dame Myra Hess’ wartime piano version.  Even though I was not born I often heard about the power of her music as an act of anti-Nazi resistance when she played during the bombing of London.

I love that the Proms honour great modern performers and Prom 45, Mississippi Goddam: A Homage to Nina Simone, was a major attraction.  The problem was that the direction of the evening was focused on making the Royal Albert Hall a pseudo night-club with flashing lights and effects that would have worked in a cabaret but were misjudged in this majestic classical space.

The stars of the evening were the Netherlands-based, Big Band Metropole Okest, under the direction of Jules Buckley, the New Orleans artist Ledesi and Lisa Fisscher, who has worked for 25 years with The Rolling Stones.  Both Americans are magnetic and both made their Proms debut with this concert.  From Henry Purcell’s Dido’s Lament to the disturbing Work Song by Nat Adderley, the diversity of Simone’s repertoire was clear.  We tend to know her for her most popular ballads, most notably Don’t Let Me Be Misunderstood, I Put A Spell On You and My Baby Just Cares For Me.  Less well known to European audiences is her rendition of Ne Me Quitte Pas.  The problem is that for those of us who are familiar with Jacques Brel and Edith Piaf’s renditions, Lidesi’s French verses lack authority.  She does not inhabit the French lyrics and does not quite dare pull at the genre to make it her own.  The discovery of the evening for me was the force of Simone’s political works Four Women and Mississippi Goddam.  Simone as entertainer or political activist – there is no need to separate the two but this evening’s direction did not find much synthesis.

Prom 50 happened on the hottest night of the year so far but the Royal Albert Hall was cool in all senses.  Robert Schumann’s nine minute overture to his opera Genoveva was an intriguing hors d’oeuvre in a concert played by the Orchestre de Paris.  The extraordinary centre piece was Jörg Widmann’s Babylon Suite.  This wild opera premiered in Munich in 2012 and in 2019 the Proms offered the orchestral premiere to a stunned audience.  This is one of the most eclectic compositions I have ever heard.  It jumps from orgiastic to circus to Bavarian folk songs to strange sounds from strange instruments.  Widmann’s Babylon Suite feels like Bosch’s Last Judgment set to music.  As a counterbalance Beethoven’s Pastoral Symphony calmed the audience and the impressive range of the Orchestre de Paris, who can flick from avant-garde to the classical, is remarkable.

I found myself noting the body language of the different conductors.  Prom 42 gave us Rafael Payare heading up the Ulster Orchestra.  He directed with such a lack of inhibition that he seemed to almost take off in flight.

In Prom 50, Daniel Harding conducting the Orchestre de Paris was more stately and rooted.  However his musicians moved their bodies towards him with each beat so that there was an almost choreographed movement impulse that added an extra layer to the rendition of the Pastoral.  When the Symphony ended the audience did not want the conductor and his musicians leave the stage.  They were charmed by Schumann, angry and excited by Widmann and in love with Beethoven.