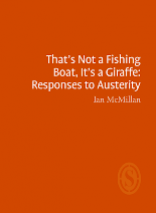 Stuart Henson wonders about the title but in other respects finds that the sharp-pointed humour in Ian McMillan’s new chapbook penetrates most of  its targets.

Austerity, we’re told, is over. The new Prime Minister is an enthusiast for the Northern Powerhouse. Maybe he’s already visited Barnsley bestowing largesse. In which case Ian McMillan, with characteristic irony, might well have called this mini-collection That’s Not a Way Out: It’s a Stable Door. The effects of ten years of cuts are unlikely, alas, to disappear with any kind of Boris quick-fix, so That’s Not a Fishing Boat… is a timely reminder of what the policy has brought us to. As you’d expect from McMillan, it’s by no means all doom and gloom. The author, the blurb reminds us ‘spends his time writing, doing gigs in village halls and presenting The Verb on BBC Radio 3. He has a lot of fun!’

If he were a footballer—and you don’t mind a good cliché—you’d say McMillan’s at the top of his game, though that metaphor breaks down a bit since he’s really among the thousands on the terraces, wearing his red shirt with pride and shouting with them, and there’s more than three points at stake.

Sometimes the images come at you straight on, as in the conclusion of the perfectly constructed ‘The Hard Ship’ which follows its conceit inexorably. As people gather to witness the launch of the eponymous ‘ship’ there are ‘the dignitaries, the brass band, the speeches’ drowned as in a terrible dream so they can’t be heard:

Others work in less obvious ways: the sadness creeps up, magnified by the resonance of the collection’s subtitle. In ‘Hang’ for instance, the dress on a charity shop coat-hanger and the blue high heels nearby are telling their ‘tottering history’. ‘Telling their story / Nobody listening.’ Or in the doubtful repetition at the close of ‘Plain’ where the speaker, lost in the emptiness of a late-night hotel bar, decides to go for broke with another packet of crisps. ‘Plain / I like plain. I like plain. I like plain’. Plain, of course, is what you get with austerity. You can hear McMillan’s voice relishing those pauses, his tongue licking the last salty crumbs out of that word.

The label ‘performance poet’ is really too reductive to do justice to Ian McMillan’s work, though there are certainly performative elements there. The Bard of Barnsley’s Uncle Charlie with his cap ‘flat / As a pit pond.’ would chat along happily at a wedding with Peter Kay’s Uncle Nobby, and McMillan himself could be the friend in Kay’s chip-shop story where travelling down south they discover they don’t do peas and they don’t do curry sauce. Yet the poems I’m thinking of here offer so much more than a gag or a laugh. Uncle Charlie, in ‘Uncle Charlie’s Moon’ is not going to be taken in by the news of Buzz Aldrin’s landing:

O the perfection, the bathos, of that bike-lamp moon. You can picture exactly the kind of lamp too, not the satellite-flashing LED things you get today but the chunky old Ever-Ready ones whose batteries sported those flapping brass connectors you could test with your tongue.

‘The Fragility of History’ is another that takes us back in time—to 1980, when the pit bus still rolls by with its occupants gesturing ‘Giz / Some of that bastard pie and peas!’ The young McMillan waves back, and at that moment none of them knows that this is the end of an era, ‘That this is the last time I will visit / The pie and pea man’s clanging bell / with my bowls that shine innocently.’ The poet as Oliver Twist. The boy who wants more from a world that’s beginning to give less and less. But there’s danger here too. The last stanza just seems a tad too much of a crowd-pleaser after what’s gone before:

The ‘helicopter shot’ ending—the lights, the stars, the universe—works fine for a live audience, but when you read it more than once you find yourself thinking, ‘Come on, Ian, you know very well what happened: you got older, the pie man retired, the takeaways moved in…’

Still, it’s not fair to criticise a hard-hitting book for one easy moment. Most of the time McMillian is out there on the street picking litter ‘Amongst the usual McDonalds and Costa / Suspects’…‘finding more and more / Empty blister packs of tablets, / Chemical voids scattered / across the pavement’s flat-top.’ That’s where he witnesses the ‘Tent / Event’, in which a rough sleeper’s home is violated by ‘a bottle of piss / Chucked // By what newspapers still insist / On calling a ‘reveller’…‘The bottle turning and turning. / John’s tent by the cash machine. / Both held in midnight streetlight.’ It’s a world where cruelty and compassion are at a stand-off—a world of ‘Drizzle and Traffic and that Seagull’, where the poet, or his persona, wakes up in the early hours and recalls the disparate yet linked images of an old lass with no coat in a bus queue, a young mother with a pram struggling to cross a busy road and a seagull lying dead in the gutter in ‘that freezing summer’. The speaker’s small acts of kindness elicit thanks from the women but no response from the seagull as he chucks it in a waste bin ‘with what was left of me chips’. The conclusion is provisional: ‘So mebbe’—and it’s only a ‘mebbe’—‘change is possible’. The seagull in the waste-bin ‘That said nowt’ is as articulate—more articulate—than Hughes’s garrulous Crow when it comes to the austerities of life and death.

Humanity and humour are the antidotes to corporate carelessness and a lack of political response. ‘Our Transport Correspondent…’ gives us a gentler glimpse of the state of the nation with some observant one-liners:

And that’s when you can get a seat. In the final part of the poem McMillan finds something luminous to redeem the intimacy of the too-familiar standing crush: ‘I’d laugh / If there was room to open my mouth. / In this carriage we / try to keep our own space sacred / Like saints in stained glass windows…’

When there’s not much else to look forward to there’s always the football of course. The Tuesday night game, the floodlights on. ‘The new moon’s slight / Curve mirrors the path of the ball’s unstoppable / Passage to the net…’ ‘Evening games in winter; a touch of the sublime.’ You’ve been there. You know the feeling, exactly.

Life, as I said, isn’t always so serious a business for Ian McMillan. The collection’s curious title’s a case in point. Is it like one of those party games where you have to follow an idea with a complete non-sequitur? Or have I missed something that’s obvious if you live north of the Trent? This little book’s chock full of the wit and dry humour you’d expect—the anger mixed with the nostalgia and the charm. His tale, typically, of ‘Me and Geoff Stables and the Can of Beans’ melds childhood fantasy and adult whimsy into a cracking thought-provoker. The poet’s memory of their plan ‘to chuck a can of beans so hard, so very hard, / Into a pile of sand that it burst the thin socks // Of time and flew into the future…’ explodes with the possibility of the experiment having actually worked. The comedian’s tone, the Michael McIntyre pitching, is rendered perfectly by the italics, the caps and the incredulous repetition:

It takes a lifetime of gigging to earn the chutzpah for that.