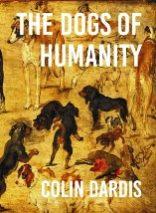 Bear with me for a moment while I start this review by talking about an entirely different poet. There is a reason for this.

I mention this because The Dogs of Humanity is a collection full of dogs of a similar stripe, dogs that are hard to make eye contact with. We begin with the spectre of a dark deed hanging over us, a reminder of a dog that had drowned in a well.

There is much to unpack from this sentence, the scruffy dog looking down in a well – like some sort of canine Narcissus – and then the idea of there being worse to come than when the dog was tempted to drink. It sets us up for what’s in store: a dredging up of emotions, feelings and darkness.

While the poems are divided into two sections – the dogs of the title section and then a separate section for other animals: lions, ducks, fish, ducks, etc – there’s a further division at work beyond this, in the sense that the first section feels full of separation, or the protagonists pulling away from the world around them.

In “Bark, Ruff, Arf, Au Au, Bow-Wow, Yip“ (A title that I believe covers every single canine dialect), the second line of the first stanza contains the chilling line “I cannot heal your barking with poison…”. Is the speaker self-medicating with alcohol or drugs, or is there a far darker connotation to this line?

I’m inclined to think it’s the former, but even so, when the protagonist lists what they cannot do for the dog in question, this is much more about the central character than the dog, and much more about them removing themselves from the world.

This idea of self-separation or isolation is found throughout the book, for example, in “Mutton for the Mutt” where we are told

The theme of isolation continues or echoes elsewhere in book. Sometimes people cut themselves off from the world as in “People in Headphones”, ‘…a sweet naivety on their part / an attempt at privacy…’ And in “The Goalkeeper and the Postmistress” we meet two protagonists who kept behind a line of sorts, both on different sides of the same door. Separation is even there in the beautiful love poem “Catch” where the idea of two people complementing each other, one as the dog and the other the stick, is explored to delightful effect. However, in the final stanza we hear

A dog-version of If I can’t have you, I don’t want anybody, but it’s an affecting poem that will stay at my side like my own Greyfriars Bobby.

In the second section of the book, entitled ‘Other Animals’, we’re ferried across to the other side by a dog, but the separation continues. The person taking a journey in “Train Scenes” is alone, separated by glass from a world where

In “Fishing” our narrator goes out and finds ‘it’s a distant shore now, getting further / and further away; shallower, even.’

For all of this talk of borders, distance and separation, it’s consoling that the collection ends on a note of unity and togetherness. In “The Humane Animal” we are asked many questions, although none of them are positive. For example,

That repetition of ‘We all are’ and the inclusiveness of it is a faint note of hope to end the book on; a recognition that throughout everything in the previous pages, after all of the isolation, we all have our dark moments and that’s what makes us human (and hopefully humane).

There’s a popular Twitter account doing the rounds called We Rate Dogshttp://We Rate Dogs, the premise of which is that there’s no such thing as a bad dog. I know London Grip doesn’t use scales or scores, but to use the WRD rating scale, I’d give The Dogs of Humanity 12/10. Good Doggo….