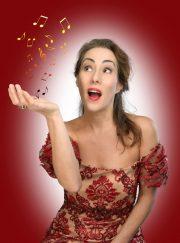 Opera and cabaret singer Melinda Hughes lost her mother in June.  Two months on, she has immortalised her in a song and is finding catharsis in a satirical take on the world.

It chimes with the prevailing Edinburgh themes of protests at Trump, Brexit, sexism and difficult relationships, especially between parents and children.  It stands apart in its musicality and thought-provoking edginess as Hughes, who writes with long-term collaborator Jeremy Limb, pushes beyond the merely comic into subject matter that’s too sophisticated to classify.

The Trolling Song follows on from her decision to block her mother’s Twitter feed because of her unpalatable views.

One of the best of the songs, it’s a tour-de-force of expletives offset by innocent, upbeat music and genteel, hypocritical trips to the yoga class.

In the spirit of the Weimar Cabaret of 1930s Germany, in which Hughes specialises, her songs freely explore sexuality and are sharply critical of politics on both sides of the Atlantic.  She also brings her show bang up to date with references to financier and sex offender Jeffrey Epstein.

Her approach to tackling unacceptable male behaviour is at its most unsettling in Old-fashioned Guy, in which she takes on the part of an unreconstructed Texan male, who thinks “no” means “not quite yet” and “hey there, sugartits” just means “hi”.

Hughes maintains the uncomfortableness and wreaks her revenge on generations of misogyny in Cougar, in which the prey turns predator, pouncing on an unsuspecting male in the audience, under the watchful eye of her French boyfriend lurking in the back rows.

Hughes is profoundly pro-European, after her studies at the Maastricht Conservatory of Music and Brussels Opera Studio.  In the current polarised, political climate, that sets her at odds with Trump’s America and her native Britain.

She manages to send up both at once in Britannia Waives the Rules — a version for our times of George and Ira Gerschwin’s Let’s Call the Whole Thing Off.

“We’re very different when it comes to fun:

“We’ve got inbreeding and you’ve got guns,” Hughes sweetly sings in cut-glass English.

Like so much else in this elegant show, it’s too near the bone to be straightforwardly funny.  We laugh uneasily as Hughes draws the parallels to the years before World War II.  In Off the Scale, the cry of anguish that opens the show, Hughes declares “tonight, we’re gonna party like it’s 1933,” when popularist leader Hitler became Chancellor, ending the Weimar period and its cabaret that proved a last bastion for political satire.