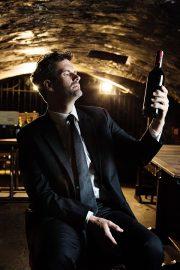 For all their anarchy, the artists of the Edinburgh fringe have a habit of homing in on salient themes.

Apart from the inescapability of Brexit, this year’s shows are preoccupied with the relationship between parents and children, perhaps partly because of the number of performers who are second generation fringe artists.

Marcus Brigstocke belongs to a first generation.  He has been performing at the fringe since 1996 and his prime aim has been to deliver comedy in person.

This year he makes his play-writing and directorial debut as actors Bruce and Sam Alexander, father and son in real life, give drama and poignancy to a story that begins with the funeral of the father.

Based on Brigstocke’s own struggles with alcoholism, this two-hander has a single, earnest plot-line.

Brigstocke has admitted he feared that might not be enough to retain interest, but the result is quietly gripping as the son, Benedict, played by Sam Alexander, wrestles with the last request of his father John (Bruce Alexander) that he should drink a bottle of Chateau Lafite Rothschild from the year of his birth.

The duo’s measured performance resonates on many levels.  The tension is potentially extreme as an alcoholic is tortured by the most tempting glass imaginable.

It also taps into the current mood of deeper anxieties about a generation feeling betrayed by authorities they can no longer trust and whose commands they question.

Lastly, it parallels another burgeoning trend for extended comic metaphors as Edinburgh’s ever more sophisticated stand-ups strive for images to express their amusement and complex anxiety at the world.

Brigstocke, in reflective, rather than laugh-a-minute mode, explores the ornate class-based, social vocabulary around wine.  Sometimes he raises a satirical smile, but his most personal work yet is more about the pain of being denied and excluded and the very adult experience of coming to terms with that.