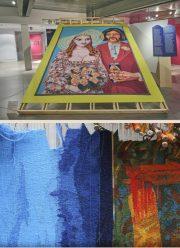 For painter Victoria Crowe, who was born in England but made her home in Scotland, tapestry produces richer, warmer versions of the colours paintings reflect.

For Grayson Perry, tapestry is the medium to explore his fascination with class, craft and community.

The two artists coincide as part of the fabulously rich tapestry of the Edinburgh festival at Dovecot Studios, a haven of reflection, tucked away from the crowds of the Royal Mile and the brasher festival venues.

Formerly a Victorian swimming pool, the studios are flooded with natural light, ideal for the team of weavers engaged in producing Richer Twilight, a version of one of Crowe’s Venetian paintings.  It is expected to be completed in September.

Richer Twilight is being woven by hand.  Perry’s tapestries draw on digital technology and human craftsmanship in the spirit of standing up for “the relevance of craft in the information age,” to quote Perry.

They are not created at Dovecot, but it is nevertheless a fitting setting for Julie Cope’s Grand Tour, Perry’s homage to an Essex Everywoman, which forms part of his most ambitious project yet.

Historically, tapestries embellished and insulated the walls of the rich and famous.  Perry’s tapestries are designed for A House for Essex, located in Wrabness and described as a residential, secular chapel, dedicated to Julie Cope and the people with whom Perry grew up.

Her life, as narrated by Perry in his Ballad of Julie Cope, began during the Canvey Island floods of 1953 as the “bombed-out cockney broods” suffered tragedy and disruption anew.

The tapestries are classic Perry: a riot of telling detail in bubble-gum pink.

A Perfect Match depicts Julie, Dave and their children among the clutter of their lives.  Dave’s cheating is summed up by a pink hairbrush found on the backseat of their car.

In the ballad, narrated by Perry as we peruse his tapestries, Julie recovers to remarry and this time, her husband Rob holds a glass of wine, whereas Dave had clutched a can of strong, pale ale.  She is blissfully happy until a tragic accident involving a curry delivery scooter.  Her widow is inspired to build a chapel in her memory – the Taj Mahal on the Stour.

Artist Victoria Crowe, who was born in Kingston before moving to Scotland, is equally committed to depicting emotions all of us feel.

Her everywoman is Jenny Armstrong, her shepherd neighbour in Kittleyknowe in the Scottish borders.

Crowe is attracted to her as a strong woman enduring in an even stronger landscape.

The most famous “Jenny painting” is Large Tree Group, which dwarfs the figure of Jenny, making her way through snow-covered fields.

Dovecot Studios transposed the picture into tapestry in 2012-13 using undyed wool.  The work hangs in the National Museum of Scotland in Edinburgh.

Other Jenny paintings on display as part of the 50-year retrospective explore her determination and sense of purpose as she makes her way through a vast landscape.  Crowe captures both the overall patterns and specific details.  For her, generalisation is impossible: every branch of every tree is unique.

We also get glimpses of life from inside Jenny’s claustrophobic cottage.

December 25 looks outward through rows of Christmas cards suspended from the ceiling like bunting.

Finally, there is no more outside in the Last Portrait as Jenny sits in her wheelchair, sifting through the contents of her handbag.

Crowe said the death of Jenny gave her freedom to invent as she painted from imagination and what she remembered, not just the reality before her.

Throughout her career, Crowe’s artistic challenge is to exceed the limits of what she describes as her “accurate eye”.

Her portraiture evolves when she meets another strong woman Winifred Rushforth, a psychoanalyst whose dream groups Crowe attended.  She depicts Rushforth in her 90s, as physically frail with a still powerful intellect against a dreamscape of monsters seen through a prosaic white window frame.

The most poignant portrait is of her son Ben, on the threshold of adult life and also of premature death from cancer.  Again, Crowe uses a window frame, and through it we see the planes of the Gulf War, which serve as a reminder of the fragility of all life and especially young male life.

Crowe realised she had a choice to dwell on the pain or to find the transcendent, which she does in Venice.  To this day, she divides her time between the Scottish borders and Venice.

Venice delivers a whole new world of light and allows exploration of the limits of the merely accurate eye as the sky melts into a watery horizon and Crowe explores the gilded, fabulous imagery of Renaissance artistry.

The exhibition’s Venice section also reconnects with the Dovecot weavers and their warm, Scottish tapestry version of the painting Twilight — Crowe’s depiction of the Venice skyline sinking into the shimmering lagoon beneath the gathering luminous gloom of the sky.