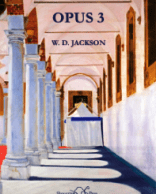 Opus 3 is certainly a magnum opus! A short review like this can hardly do it justice. It runs to over 480 pages, about a hundred of which are detailed notes. And considering the nature of the poems, these notes are useful as well as being very interesting in their own right (and only a bit self-indulgent!). Not that the poems are ‘difficult’ and cannot stand on their own two feet. Even though they are often fairly lengthy by modern-day standards, they are readily accessible. But the pleasures they offer are all the greater if you understand where they are coming from. Jackson is deep into the poetic traditions of Italy, France and Germany, as well as his homeland. Or perhaps, we should rather say, Europe is his homeland. Many are translations or versions of poems from Heine, Dante, Rilke, the great tradition of European poetry. His versions of tales from Boccaccio are racy and sometimes quite erotic. He writes these tales in rhyming iambics with run-on lines in a very natural way – his technical skills are amazing and his clever rhymes point up the wit of his expression delightfully. You chuckle your way through them. And are left admiring his artistry.

This book is a coming together of some previously published books and is itself only a part of Jackson’s even larger work-in-progress, Then and Now. He is nothing if not ambitious. But he has the dedication, skills and erudition to bring off an ambitious project. What is this project? To examine contemporary European consciousness as it stands (or totters) on the shoulders of more than two millennia of European life and literature. And this consciousness exists in the head of the poet, who was brought up in deprived Liverpool and has subsequently lived and worked most of his adult life in Italy and Germany, during which time he has read – as far as I can make out – just about everything!

Translations play a large part in this project in the way that he modernises his versions (as he says about his translations of Dante’s canzone from Vita nuova) “with the intention of raising… the question of what… these thoughts/feeling/forms mean to us now.” Thus, a translation is not just a translation but also an implicit critique and discussion not only of the past but the present.

Similarly, his original poems are full of reflections and references to others’ poems, including references to English poets – who are also part of the great European tradition. For example, in “Shakespearean Sonnets”, he gives voices and perspectives to minor characters in Shakespeare’s plays that provide new, sometimes ironic, perspectives for the reader.

In general, Jackson weaves complex grammar through the metre to build long, well-modulated sentences, well-balanced arguments, and generally gives formal and moral seriousness a good name. His concern is with what it means to be human today while at the same time being a product of history. His troubled poetic persona is one who struggles to make moral sense of a troubled history and culture. It all constitutes a ‘criticism of life’. At the same time, it is very entertaining, clever and funny. With many modern poets, I ask, “Where’s the beef?” With Jackson no such questions arise. His poems are not anecdotal and self-absorbed, but are for grown-ups interested in the examined life and in examining the culture that has created them.

One theme, the death of innocence, provides the title of one section and pervades the whole book – as it pervades the whole of Christian-influenced culture. The section begins with the wonderful line, “The apple grew like any other fruit / In that ecstatic garden…” We are reminded of the commonplaceness of evil. And this theme is returned to later in a block of material that looks at the Nazi phenomenon – a phenomenon that no study of our European culture can ignore. A section that starts with autobiographical material,

continues with translations of the verbal-trickster poet Jandl (a task that, though seemingly impossible, Jackson is equal to), that raise Orwellian issues about the relationship between language, meaning and moral awareness. This seems to lead naturally into the corruptions of language and sensibility that underlie the stories of various Nazi individuals examined in subsequent poems. Such poems need to be documented to establish their truth-to-life, and these poems carry quite a heavy weight of substantiating notes. Together, these notes and poems make an overwhelming statement about the death of innocence.

And yet, the book ends with a translation of Rilke’s “O, sage, Dichter, was du tust”, with its refrain about what the poets does – the poet gives praise. The praise that Jackson gives is of a high order, celebrating the seriousness of life which we generally choose to forget.