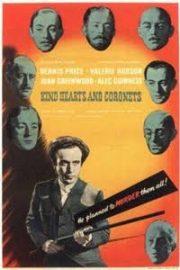 Many critics and cinephiles regard “Kind Hearts and Coronets” as the best comedy made at Ealing Studios between 1947 and 1958, surpassing classics like “The Lavender Hill Mob” and even “The Lady Killers”.  A new 4k version has been released to celebrate the film’s seventieth anniversary and I was fortunate to attend a recent screening on the South Bank at the BFI.

The Ealing Comedies and are usually remembered for their affectionate take on the peculiarities of life in post-war Britain, using actors like Alastair Sim and Margaret Rutherford to epitomise everything we cherish about the lovable English eccentric.  It might be tempting, then, to lump them together with John Major’s Orwell-inspired vision of England, with its “old maids cycling through the mists to Holy Communion” but that would be erroneous.  The cinematography frequently gives off a distinctly European sensibility and these comedies are far from cosy; every one of those lady killers died a horrible death.

The plot of “Kind Hearts and Coronets” tells the story of an individual who determines to assassinate an entire branch of the English aristocracy, the D’Ascoyne family, in a comedy as dark as dark can be.  Set in the Edwardian era, it would still have been hard for the audience to miss its revolutionary tenor at a time when the National Trust was busy buying up the stately homes of England while a Labour government set about the business of building the welfare state.

The protagonist, Louis Mazzini, played by Dennis Price, is the son of a scion of the D’Ascoyne family, who has been disowned for her choice of husband, a low-born, Italian opera singer.  He dies as soon as Louis is delivered into the world. Louis’s Mama -she has no name- brightens his upbringing in humdrum, middle-class circumstances with tales of the splendours of Chalfont Castle, seat of the D’Ascoyne Dukedom, and plants a seed in his mind: the title can be passed down the maternal line.

When he leaves school his mother appeals to Lord Ascoyne D’Ascoyne, the banker, to employ her boy, but her sin remains unforgiven and he refuses Louis a job.  He becomes a draper’s assistant on the underwear counter of a department store and bereavement follows disappointment; Louis’ mother dies and is cruelly denied a resting place in the D’Ascoyne family mausoleum.

Louis’ amour propre takes a further pounding when his childhood sweetheart, the delicious Joan Greenwood, turns down his proposal, mocks his presumption and tells him she has chosen, Lionel Holland, “the most boring man in Europe”, as her future husband because his father is a wealthy man.  The iron finally enters Louis’ soul when the Lord’s son, Ascoyne D’Ascoyne turns up to his place of work in search of lingerie for his mistress, a quarrel breaks out and he is fired.

First, he exacts revenge on Ascoyne and disposes of him by staging a fatal boating accident. Recognising a talent for getting away with murder, he hatches a plot to wipe out every other member of the D’Ascoyne dynasty who stands in his way to the dukedom.

Next, he ingratiates himself with his victim’s father, Lord Ascoyne D’Ascoyne, by writing a letter of condolence which secures him a position at the bank. His newfound affluence comes along with a dandy’s clothing, chambers in St. James and the secret renewal of his liaison with Sibella.

As he works his way up the bank’s hierarchy, he offs various D’Ascoynes with astonishing displays of cunning and ingenuity and not only does he reach the top he also succeeds to the title of Duke.  Somewhere along the way he has started a relationship with another victim’s widow, Edith D’Ascoyne, an insufferable prig played beautifully by Valerie Hobson, and intends to marry her.

It all starts to unravel when Lionel Holland tries to blackmail him over his affair with Sibella, fails and commits suicide. Louis is arrested, tried, wrongly convicted of Holland’s murder and taken to prison cell to wait for hanging by the neck with the silken rope which is his due as a peer of the realm. While he waits, he writes a memoir of his murderous deeds which composes the film’s narrative framework.

Revealing the twists and turns which lead to the denouement would spoil Kind Hearts and Coronets for anyone who hasn’t seen it yet, but I will say the final scenes give Greenwood’s Sibella the chance to show her potential as a worthy partner-in-crime for Mazzini.

The Times of 1949 opined that Alec Guiness “rightfully, retains all the praise for playing nine members of the upper-crust D’Ascoyne family” and today his name is the one which comes most readily to mind when “Kind Hearts and Coronets” is mentioned, but it seems to me that Guiness’s pre-eminence has unjustly obscured Dennis Price’s brilliant portrayal of a sociopathic, serial killer in the making.

Price’s Mazzini starts out as a supplicant, begging for Sibella’s hand in marriage and the D’Ascoyne family for his mother’s rightful place in their burial chamber.  However, after the sacking it seems clear that his mother’s childhood stories of Chalfont have proved toxic and when mixed with the hurts and humiliation of early adulthood, fed deadly poison to the soul, rather than nourishing the dreams she hoped to inspire.  His demeanour begins to transform as he executes one D’Ascoyne after another: his face lengthens and assumes an unattractive hauteur, while his mouth puckers into a moue of disdain.  He turns into the archetypal pitiless, cunning killer convinced of his invincibility who can though, when it suits him, switch on the charm to insinuate himself into situations which allow him access to his victims.

Anthony Mendlesson’s costumes play a significant role in the transformation of Louis’ character as he evolves from humble shop boy in a drab lounge suit into the Duke of Chalfont with a wardrobe of super-elegant frock coats.  On the way up, he relaxes in his chambers in a gorgeous, fitted, full-length brocade house coat edged with braid.  He passes his night in the condemned cell, outwardly unruffled, with a decanter of port and bunch of grapes before him, dressed in a quilted smoking jacket adorned with a sumptuous satin collar.  Not only do his clothes signal a dramatic shift in his social and financial status, they also mould his body into the proud, upright figure of an Edwardian gentleman.

Somehow it was easy to miss all this, watching “Kind Hearts and Coronets” on a tiny tv at home when it was a staple of Sunday afternoon schedules.  There were just too many D’Ascoynes and, yes, Alec Guinness’s performance is a tour de force.  Besides, who could forget Lady Agatha, the suffragette, scattering pamphlets from a hot-air balloon until she’s brought to earth by an arrow in Berkley Square or the Reverend Lord D’Ascoyne whose tedious dilations on the history of ecclesiastical architecture might have driven anyone to homicide?

Seeing “Kind Hearts and Coronets” on the big screen in the cinema made me really pay attention.  There is the witty, epigrammatic script by John Dighton and Robert Hamer, Hamer’s direction of the best film he made before succumbing to his own demon, the drink, fourteen years later and, of course Dennis Price – silky, smooth and deadly.

Look out for screenings of “Kind Hearts and Coronets” in celebration of its seventieth anniversary at an arts venue near you.