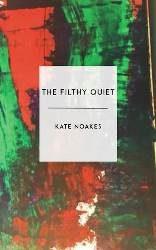 Kate Noakes’ seventh poetry collection, The Filthy Quiet, has a personal narrative, moving from the long disintegration of one relationship and its impact to the new, restorative relationship with which the sequence concludes. Although these are separate poems much is gained by reading them in order; their accumulation of images from the natural world underscores her shifting emotional palette. This is a sensuous and tactile collection, rooted in Noakes’ physical world.

With the opening poem, ‘The threshold’, Noakes reveals her pattern of mapping vivid visual images against her own situation; while she avoids giving specific detail she establishes an emotional register for the first two-thirds of the collection.

The italicised coda, in apposition to each of the three stanzas and repeated with variation, asserts her elemental determination to survive. How difficult this is, especially when the relationship was long-lasting, is drawn out in ‘I pack you in my bags by mistake’, where the landscape is inseparable from memory.

This is a key poem; that glimpse of sea in the opening couplet is significant. The sea and swimming in its strong tidal pulse will become recurring images of possibility and a renewed appetite for connecting fully with nature in all its forms. Noakes is a traveller, not only in geography but in classical literature, looking into myth and female divinity for reflections of herself. In ‘Medea’ (one of the longer poems in the collection) she inhabits this troubled and vengeful character in a first-person re-telling, using rhyming couplets. These are generally full rhyme, although I’m unsure whether the irregularities – mine/lines, wife/lives/ wine/time, for example – have been chosen to indicate a degree of instability in Medea’s complex personality. To judge from this collection Noakes is not instinctively drawn towards rhyme, and so some of these near-rhymes unsettle the surface of the poem. It’s a contrast with the greater sureness she shows in free verse. ‘Medea’, however, has connections with other poems because Medea’s botanical knowledge (‘I’ve studied rank hedgerow herbs all my life’) – a line repeated with variations within the poem – is echoed in later poems using spells and plants – ‘Elements for benign banishment’ and, using birds, ‘How to ward off the sky’.

The poem that provides the collection with its title is a nine-section snapshot of Naples – and what more fitting backdrop for strong emotion, passion, and destruction. While Pompeii and Herculaneum show tourists the suffocating ash from Vesuvius’ eruption, the poem’s foreground has a different disintegration: the dynamics of a relationship splitting in two. The penultimate section has Caravaggio’s Flagellation of Christ, the object of a long walk, set against ‘… you/ emptying my heart// leaving tatters, close down sections/ of my past …’ In the final section, ‘IX – Palazzo Reale’ the grandiose surfaces have their ‘dust, the dirt of decades’ and we know, with Noakes, and even before she tells us, that this is the end.

But the tipping point in the collection, for me, comes with the ironic humour in ‘And also his wife’, a poem beginning in one place, with a widow kneeling at a graveside, clipping grass, setting fresh flowers; it’s a familiar image, and unexpected – until the poems swings round to surprise the reader with a single ‘Wait’, and then

That spark of sharp humour, overturning the conventions and our expectations, confirms a shift of mood. A prose poem ‘You know, like buses’, written in the third person to give a measure of distance, plays with the idea of a fresh start. In ‘Woman taken by a wave’ – there’s a sense that the incoming tide and new relationship overlap. The tide is addressed directly, and the ambiguities in language play with both water and sex.

The sensuous poems which follow confirm a new direction in life, while remaining in the natural world laid down in earlier poems. Despite being a collection with dislocation at its heart these poems show personal continuity and the survival of an individual spirit. No one goes through life without collecting a few scars but in the wry title of the final poem – ‘I am oddly content’ – there’s a sense of completeness, realised in and through language.