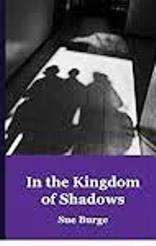 This may be Sue Burge’s debut collection but the poet already seems to know exactly how to draw the reader into her world. The poems are accomplished, scenic, inspiring and sensitive. It is not surprising that there are poems that speak like scene sequences because Burge lectures on film studies and creative writing and is able to draw on her experiences of the absorbing nature of both art forms. This book was written with the assistance of an Arts Council grant and was short-listed for the Live Canon First Collection Prize.

The book has an epigraph to Maxim Gorky on seeing films for the first time who said, ‘Last night I was in the kingdom of shadows’. The poems in this collection constantly take us into the ‘kingdom of shadows’ in a new – or maybe familiar – disturbing and visual way. There is a sad resonance around the words ‘pale limbs fading into moonlight.’ This poem needs to be spoken slowly: the tone resembles a bell tolling.

Burge is strong on tone in each of her poems. Words are carefully chosen to map the content and form. Her poetic craft is exemplary.

Or consider these lines from ‘Doppelganger’

A ‘pale flit’ into another realm is just what some of these poems represent. And in this one there is also an interesting play on the word ‘mourning’. On hearing the poem without seeing it, a listener could be forgiven for replacing ‘mourning’ with ‘morning’. Both make sense.

This is powerful writing. The image is not only immediate and startling but the words ‘dry translucence’ echo one of the book’s memorable transformative moments.

The poems are emotionally and physically connected, as in this extract from ‘In Dreams of Starlit Water’

or in these scene-setting lines from ‘The Big Freeze’

Fantasy, play and humour are present in these works that take us beyond the words into another realm. But realism abides here too – for instance in ‘The Plates I bought’

This is one of my own favourite poems in the book. However I believe ‘Bryce’ is one that has a special resonance for Burge herself. This poem is dedicated to her friend, a dancer, who died of AIDS after being one of the first people to be diagnosed with it in 1987. Such background information can be important as the poems take human fragility and mortality in a variety of ways and techniques. The subject range covers a spectrum of life experiences in a unique and refreshing way. Here is an extract from ‘Bryce’:

A pertinent phrase in this poem is ’I re-imagine you’. Many of Burge’s poems guide the reader to imaging or re-imagining a situation familiar or unfamiliar to them. This is scenic poetry at its best. And that is why I have written the word ’imaging’ here. We can cast poems into images that either stay fixed or move quickly on. Burge has a real talent to delve into the unconscious repertoire of images that are unknown and yet recognisable in the individual psyche. Her poems are complex but exciting worlds to enter. These are poems that can enrich lives and leave the reader with much to contemplate and wanting more work like this to help us make sense of many daily happenings. What’s more, the poems never flag. Each is as important as the one that has gone before or comes after just as though one is watching a film or play.

This collection features a range of poetic forms, all accomplished, and I particularly enjoyed the prose poem, ‘Golem – Citations Needed’, which is placed immediately after ‘Ripper’. Although ‘Ripper’ is based on fact and ‘Golem’ is a figure in Jewish folklore the two poems sit comfortably on opposite sides of a thin line between fact and fiction that makes this writing so appealing.

I much admire Burge’s writing ability and her talent for engagement. I will look forward to her next collection.