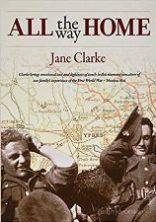 In the midst of death – in this case the carnage of the First World War – we are in life. Jane Clarke has written this suite of poems based on her time at the Mary Evans Picture Library in Lewisham. While there she looked at a family archive, specifically the letters of a serving solider, Albert Auerbach, to his sister, Lucy. Albert made it almost to the end of the war and was killed by a shell in September 1918. With this promising trove of material Clarke has woven a tender tale.

Yes, there is the mention of the gruesome nature of war, even during the famous Boxing Day 1916 football match, where she speaks of the wounded players ‘Still hot/their bodies were stretchered/from the pitch.’ But mostly the over-riding impression is the search for beauty from the (un)natural world in the images she chooses.

The opening and closing poems are concerned with apple trees. The first speaks of the harvest in 1914 ’(we) laid them one by one/ on the dusty floorboards in the attic,’ and towards the end of the book is a poem about the spring pruning in the year after Albert died. I would have preferred this to be the final poem in order to bookend the sequence, especially as the actual last poem, “Rowan”, is the tiniest of notes. In between there are some lovely things – for example, these thoughts of future farmers levelling the fields in “After We’re Gone”

I liked the search for sphagnum moss told by a hospital doctor: ‘knee-deep in Clara Bog,/…picking out twigs and leaves,/beetles, dragonflies, frogs…’. These images make for a connection with Lucy’s farm work, which features in poems on milking and chopping wood. And nature arrives directly the trenches in ‘A sprig of heather falling from my sister’s letter’ in “Ling”.

There is much wishful looking forward and wishing to get away: “In the Dugout”, where the troops’ future plans change from the fanciful to the ordinary – ‘a drink in the local’ etc. as the war progresses; and “When All This is Over”, where the wish is to follow ‘a path/though silver birch and pine’ to listen for the shepherd and his flock, look for grasses and ‘catch the scent of crushed chamomile lavender thyme’.

Clarke has a precise and vivid eye for the natural world, but she does not seek refuge there and there are hard hitting poems like “Bouchavesnes”, which describes grave digging for the recently fallen, or “Refugee”, which is about a woman who somehow took her piano with her as she escaped.

There is much to enjoy, if that is not the wrong word, in this pamphlet and the photographs from the archive that accompany the poems are interesting and not always, thank goodness, directly illustrative. My worries are though that the poems are rather short; they are little meditations, tiny stories where there is surely so much more to say. I think here more could easily have been more and that’s a pity.