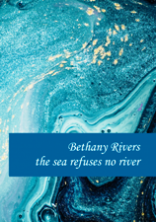 the sea refuses no river deals with grief and longing but travels towards a note of hope. Its journey is not steeped in gloom but is packed with reminders that life continues no matter how unsettling the circumstances. ‘Hiraeth’ offers descriptions of home, borrowing for its title a Welsh word that doesn’t directly translate into English but is associated with a bittersweet memory of missing places or people while also being grateful for their existence. It conveys a longing for an ancestral homeland and even though it may have never been seen

‘Home’ gains an initial capital as it shifts from concept to what home means for the poem’s narrator. It captures the sense of hiraeth in that home is where one inexplicably feels a welcome connection, even in a foreign place. It’s also caught up in memories triggered by a scent or musical rhythm. ‘Hiraeth’ comes very naturally after a poem about the poet’s father’s grave where flowers grow behind the headstone.

A later poem, ‘Rise’ opens with a question “what is it that stops you going down/ to the river with stones in your pockets?”

The title is open to interpretation: it could be taken literally to refer to getting out of bed in the morning gloom, but it could also be an allusion to Maya Angelou’s ‘Still I Rise’, defiantly getting up after being knocked down. The poem’s addressee seems buried in a fog of depression and unable to enthuse. She’s also a lone parent and has to get up to care for a child. I’m uneasy with the implication that those who aren’t parents have a choice since that suggests they’re free of responsibilities. Virginia Woolf, who did walk into a river weighed down with stones, left behind a husband, friends and relatives; were they not a ‘thread to the future’?

If the sea refuses no river begins in winter, it ends in spring. In ‘I turn to the daffodils’ the speaker picks one flower and holds it in order to

The full-stop after ‘burned’ is the first full-stop in the poem. The use of gaps between words suggest pauses in a line of thought. Daffodils are tricky flowers to write about after Wordsworth and their association with narcissism is not explored here. Instead they are shown as bright signs of spring and their burn is like a shock that restarts a heart.

the sea refuses no river is a collection of gentle, reflective poems that explore the passage of grief using words as a guide. The poems are restrained from sentiment by keeping their focus on healing and on life’s continuation. The book ends in an offer of solace. The poems may not have the immediate energy of the Pete Townshend song they share a title with, but they do delicately contain the idea behind it.