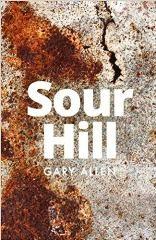 P.W. Bridgman sums up Gary Allen’s powerful book-length poem as “a jagged lament for a despoiled Eden that never was”

The Sour Hill of Gary Allen’s eponymous book-length poem is a conjured place with a fractious history; a place where the living are thin on the ground and, yet, where the souls of the discomfited dead walk its streets and fields in numbers. In this newly published and important work, poet Gary Allen has summoned up, from imagination, a place for us all to pause and consider. It is a place that will both unsettle and enlighten readers who are prepared give it a chance.

To those with some previous experience of Allen’s poetry, Sour Hill will recognisably be a return to familiar ground. And well might it be. His native Northern Ireland has a famously complex and troubled past; it is a place full of irrepressible ghosts, and yet… one where, in his view, “all of the past has been swept into the corners.” The perpetual tension between truth and recorded histories seems to have animated much of Allen’s writing and that tension is certainly in evidence here once again.

This poet is a distruster of memory (particularly collective memory) and the way it conveniently seeks to reconstitute past events to align with current prejudices, ideologies and aspirations. In his poems, Allen often entertains opinionated visitors from the dead who decline to parrot popular orthodoxies. So it continues in Sour Hill. The ghostly visitors in this new book take issue with the accounts the living give of past events, refracted as they are through the distorting lens of dynamic human memory. With nothing to lose, those ghostly visitors therefore speak plainly when they aim to set the record straight. They pull no punches.

Sour Hill chronicles local happenings—momentous and trivial—in the Co. Antrim townland of Allen’s imaginings and the poet trains a frequently unforgiving light on some of the people central to them over the span of many generations. He shows his readers that while certain past events may have conveniently been transmuted into untruths or “swept into the corners” by some, they do nevertheless continue to resurface unalloyed, reverberating and shaping human action up to the present.

In this book-length poem (as in other poems he has written), Allen has elected to travel with characters many of whom have clearly visible feet of clay: characters who, we learn early, are deeply flawed and, in some respects, quite markedly unsympathetic… at least at first. Thus, the narrator of Sour Hill is introduced in the Prologue most unheroically. He was chosen:

It requires a unique combination of courage and writerly talent for a writer to confer protagonist or narrator status on a character whose unlikeable qualities feature so prominently in his or her work. Few are prepared to risk it, and fewer still succeed when they do. But Allen has succeeded and so the reader is encouraged to press ahead despite inevitable first misgivings.

When reading Sour Hill, one is put in mind of Anakana Schofield’s Giller Prize-shortlisted, much-lauded and conspicuously brilliant novel, Martin John. Of that book, Eimear McBride said this in her New York Times review:

That insightful passage may be applied, mutatis mutandis, to Gary Allen’s portrayal of the narrator and many of the other seedy characters who animate his darkly magnificent Sour Hill. And as reviewer John Lucas said in 2016 in his London Grip assessment of an earlier Allen collection entitled Jackson’s Corner, this poet at his best “achieves a spare, taut recording of lost or unachieved lives that doesn’t sink to glumness, but which, odd though it may seem, has about it a saving, even cherishable, humaneness.”

Part of the increasingly sympathetic hearing one gives to Sour Hill’s flawed narrator as one proceeds through the book’s 81 pages can be traced, perhaps, to a rightful disinclination to “shoot the messenger.” Yes, the narrator bears the clear imprint of his dreary surroundings and its depredations. But those surroundings and those depredations are so skilfully and palpably wrought in Allen’s poetry that the reader is often stopped figuratively his or her tracks by the extraordinarily rich imagery that flows through and out of the narrator’s words; by the “garlic and sapphires in the mud” as Eliot put it in Burnt Norton.

Consider this portrayal of those responsible for environmental depredations at Sour Hill—a collective mini-portrait of the “impossible possible men” who, as land developers, worked together to transform parts of the area from one kind of moonscape into another:

Or this ringing indictment of our distinctly modern, and soul-destroying, enslavement to technology:

Sour Hill is, in the end, a jagged lament for a despoiled Eden that never was. Allen’s attention to the often-unsettling detail of quotidian life across generations resembles, in words, the vivid painterly vision of Pieter Breughel the Elder. Allen will not be praised universally for pulling aside the curtain in the way he has in this deeply affecting, book-length poem. He has taken his lumps for just this kind of nothing-held-back, dystopian candour before. But that hasn’t deterred him, nor should it. Sour Hill is, to be sure, a difficult read but also an artful and thought-provoking one that ought not be passed up.