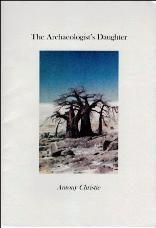 A search for identity through artefacts and fragments carefully and patiently dug out from earth characterises the process of the archaeologist’s daughter. She has no name and is only identified through her father, the archaeologist. She too will become an archaeologist in the course of the narrative. The poems explore a symbolic reconnection with an ancestral past that visits different lands from Labrador to Botswana, Lofoten Islands, France and England. They trace the archaeologist’s daughter’s route, chronologically pointing out the connection between the real objects and their mysterious almost spiritual aura.

The poems are mostly voiced in the third person, as the titles highlight, describing the protagonist from the outside and, at the same time, mapping her inside life. Her sensitivity to different materials and familiarity with excavation work starts from an early age:

This is linked to mythology and poetry, not only in the poems in this collection, but also to the poetic side of her vocation, that is, to her work of archaeologist that follows her father’s path. As the epigraph from Orhan Pamuk’s novel The Museum of Innocence states: ‘the past is preserved within objects as souls are kept in their earthen bodies’. We can imagine her reading Keats’ ‘Ode on a Grecian Urn’and joining with poet in asking:

She interrogates the artefacts in her daily work to make sense of a past ‘that can never quite reconstruct/the fine detail of those distant civilizations’. The lines also link to Keats’ poem ‘Lamia’, where the woman protagonist has an unhappy destiny, and to ‘The Eve of St Agnes’, where romantic love is exalted. Nevertheless, the archaeologist’s daughter does not seem interested in love; she’d rather dedicate herself to her job- although she does fall in love eventually:

Her love is connected with her work, her brushing and scraping of old bones reveal passion and temporality, desire and dissolution, evoking the sensuality of Keats’ poems.

Digging out a skull seems to be her utmost pleasure; she performs it with accuracy and care:

A crow is her best companion in this research which absorbs all her being and brings her back to the origins where ‘bones speak to her’ in an intimate way. The old bones reveal to her their past and tell her their stories that can be of sufferings and sacrifice:

Her relationship with the artefacts she uncovers works as a metaphor of her self-discovery that helps he find her identity. The objects have a voice, a ‘voice of sky’; they express

Therefore, the living is connected with the land through the ancestors who are revived with the discovery of the artefacts. This belonging is conveyed through objects that acquire a special, mysterious power, a ‘soul’.

Her father is also transformed into a sort of artefact when he dies:

His death prompts her plans for her own funeral rites according to ancient rituals. In her will she opts for ‘a burning first/preferably a pyre,/with plenty of gasoline and dry wood’. She wants the mourners to ‘laugh, dance,/sing … stories’, and then ‘take out a small boat/ … scatter me to the air and water’. She wishes to merge with the elements, become ‘instantly elemental’, back to the earth and to the authenticity of a primordial life. This is evoked in the ancestral essence of her story which distrusts ‘the indignities/ … of labelling and public display’.

The final poem shows the end of her life ‘into an afterlife she neither believes in/nor wants’. She enters ‘in a darkness that is absolute,/without substance’ but still keeps the intensity of her life, ‘of her own fierce loves’. From the final lines it seems that this passion and her legacy are transferred to her granddaughter who practices ‘an archaeology too new/for her’, in a future that is opening to new horizons.

The poems acutely explore the development of the life and career of the archaeologist’s daughter with fascinating concepts that link metaphorically to the roots of our past through objects and artefacts, conveying an intrinsic primordial significance.