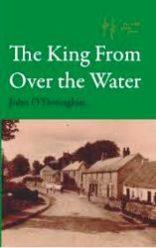 The King From Over The Water

As a child of Irish parents, I found much to recognise in The King From Over the Water. Like many families, we crossed the Irish Sea each summer to the places our parents called ‘home’. They were our homes, too, for a few weeks each year. But these stories are not just for those of us who remember our first taste of Tayto crisps and red lemonade. They are a gentle journey into childhood, our hero John Kevin trying to make sense of the adult world along with his Irish cousins, and negotiating the differences between Ireland and England, the two places he calls home.

There are overarching themes of youth, life and death; past, present and the impending future; and where a child of the Diaspora belongs. It is a lyrical and engaging collection, comic and poignant, and one which plays with the boundaries between truth and fiction.

It begins with “A Crossing”, in which John Kevin and his mother are on the boat to Ireland, without his father, who is an absence each summer. There is a subtle rendering of age and era. John Kevin’s voice and experiences suggest him growing on that first crossing of the Irish Sea from a five-year-old to a teenager. The passing of the years is marked by JFK’s visit to Ireland, the 1966 World Cup and the first men on the moon.

John Kevin has six cousins in the fictional Ballydawn, but it is the relationship between the only child, John Kevin, and Mattie that is the most important. It is an often moving depiction of ‘blood brothers’. In “A Day at the Seaside”, Mattie says: ‘We’re flesh and blood, John Kevin. Cousins. You’re a part of me, and I’m a part of you.’

In “The Time Capsule” the children assemble items to bury, to be dug up in the future. John Kevin says: ‘We can travel through space, but we can’t travel through time. But we’ll have the next best thing. We’ll be able to travel back to today thirty years from now.’ An apt symbol of these stories, which themselves constitute a time capsule. A Bushmills box containing a Corgi car, a Superman comic and rosary beads remains unburied, when the children unearth a box with a rifle in it, in a neighbouring field. They quickly cover it up, and retreat with their treasures. ‘I knew nothing of Ireland’s past […] an English boy pretending I belonged.’

A favourite story for this reader is “A Visit from Grandpa”. It zooms close in upon the small world of Ballydawn, a gathering to watch ‘the man with hair like a loaf of bread that’s just risen’ address the Irish from their own soil, on the one television owned by the clan. Through the screen, and President Kennedy’s speech, the lens of the story zooms out to the Diaspora, those that headed for Boston rather than London, then back to this microcosm of rural Ireland as the family dance to Grandpa’s fiddle on a road with no cars.

Ballydawn is near the border with the north, and while we get a sense that nothing bad will happen to the children, Ireland’s past and the current Troubles are there in the background, sometimes all too close. In “Playing Tig”, news of violence from over the border breaks the spell of a summer afternoon, at the end of the 1960s. Until now, the dead and injured have only been in the Wild West games played by the cousins.

Imagination and real-life co-exist for John Kevin. Auntie Annie’s white horse is the unicorn in his story book; he experiments with kissing his girl cousins, left outside in the van while Uncle Tommy goes to Jimmy’s Bar for a whiskey. John Kevin decides that this is a ‘special medicine’, which puts Uncle Tommy in a good mood. Children are often invisible to adults, and John Kevin witnesses much that he attempts to make sense of alone. He deals with some of the trauma that adults have endured by merging their reality with stories. On discovering that the man the cousins call the Bogey Man is suffering from shell shock, John Kevin imagines him captured by mermen and teased with sea-shells. As an outsider, and a child of great imagination, he sees beyond what his cousins take for granted. He sees something magical, yet notices the reality of the Bogey Man’s tears.

Each summer, John Kevin misses his father. The absence isn’t explained. The mother’s family do not leave this unspoken: ‘You’d hardly think he was Irish at all, the way he’s never over’. The father sends comics, and treasured signed photographs of footballers, but John Kevin ‘wished next year he’d come with us so I didn’t miss him.’ We should not assume that all of O’Donoghue’s fictions are drawn from real life. But I do want to believe, as in this book, that the real John Kevin shared his first pint of Guinness with his father in a pub in Ballydawn.

In the epigraph to this collection, O’Donoghue teases the reader: ‘Ballydawn doesn’t exist. But it did, once upon a time.’ Having read O’Donoghue’s award-winning memoir, Sectioned: A Life Interrupted, I know that the idyll of the world these stories depict is shattered, the year after they end. John O’Donoghue’s father died when John was only 14 years old, and he also lost his mother through illness and an early death. This is alluded to in the final story, “The Spot in His Eye”, in a section of its own: “The Ballydawn Chronicles”, where the narration changes to third person.

I have puzzled over this story within a story. A stranger visits a writer’s circle. The members have been working for some years on stories based in an imaginary Irish village, Ballydawn. They intended to publish the stories as The Ballydawn Chronicles, but one member of the group ran off with the funds to print them. In a confusion of fiction and truth, the stranger (whom we assume is John Kevin) says his mother was from Ballydawn, and there is a suggestion, in the final sentence, that he will now take up the baton of writing The Ballydawn Chronicles: ‘At last it was his turn to speak.’ We are left with the impression that the author is standing both on the sidelines and in the story, not with a ‘Spot in His Eye’ but a twinkle.

In “A Place of Asylum”*, a companion piece to The King From Over the Water, John O’Donoghue reveals the ‘real’ Ballydawn: Ballinode, Co. Monaghan. ‘It was in Ballinode that I realised home was where your people were, and that made the parish of St Joseph’s in Leyton a much more provisional place for me. It was as if I was learning to be amphibious, to acquire Irish ways and even a brogue as well as a Cockney hardness you needed on the playgrounds, parks and precincts of East London.’

*“A Place of Asylum” appears in I Wouldn’t Start From Here: The Second Generation Irish in Britain, Ray French, Moy McCrory and Kath Mckay (eds), The Wild Geese Press, 2019