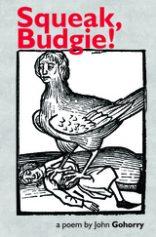 Pipsqueak, the eponymous Budgie, has distinguished antecedents. His forbears can be found among the Budgerigars and the polyglot Parrot of John Gohorry’s first book A Voyage Round the Moon:

His mother’s lineage can be traced back to John Skelton’s 16th Century satire Speke Parrot. Indeed Skelton’s Peerless Papagay puts in a guest appearance at the end of the present book to join with Pipsqueak in a valedictory lament for a more liberal and enlightened age.

Young Pipsqueak (he’s young in spirit at least) is no ivory-towered academic, nor is he hiding his light under a cage-cloth. He’s out there mixing it with the politicians and pundits to try to make sense of the shambles that goes under the joyless name of Brexit. His modus operandi is, naturally enough, satire—and he’s not afraid of getting his beak dirty.

Following Pipsqueak is better than watching Peston or Andrew Marr, and Pipsqueak isn’t bound in the way that journalists are to be even-handed. (‘Pipsqueak is a working bird, a listener, an Inside Ear’) His magnum opus takes us, from November 2016 through to May of this year, encompassing the rise of Trump, the triggering of Article 50, the Windrush scandal and the World Cup along the way. The poem is constructed in a series of parts or chapters— Parliament must have a Meaningful Vote, Pre-Eurosummit manouvres, Making fudge at Chequers—cast in a lively and irreverent rime royal:

It’s a relief to have such a clear sighted commentary – one that engages with the political at a sophisticated level yet leavens its message with humanity and self-mockery.

Each part is rounded with a song – pop, folk, rap, a song for Europe – and these are punctuated, medieval-style, with Latin choruses. (Pipsqueak studied those endangered subjects modern languages and Latin at school, and he puts his scholarship to excellent use.) The burden of these songs is: ‘Step into other people’s shoes / and walk along the street; / confound your prejudicial views; / see if perspectives meet. // In calceis aliorum mundum per oculos aliorum videre potes.’

That’s not to say that Gohorry’s satire is in any way namby-pamby when it comes to ‘calling-out’ the villains of the piece. When Dominic Raab gives Michel Barnier a copy of The Hedgehog and the Fox, ‘Pipsqueak has read Berlin’s essay, and smelling a rat, / sees how easy it is to turn all Raab implies on its head, / reading EU as fox and UK as hedgehog instead.’

Among the aforementioned, we encounter Bullingdon Boris, Spreadsheet Phil and the unyielding Cousin Arlene. One of the most acidic of the songs, to the tune of ‘Good-night Irene’, resounds with the chorus (Nunc omnes in commune) ‘Arlene, squeeze tight etc. … They need your votes tonight.’ The poet’s responsibility is to hold as t’were a mirror up to nature, and Pipsqueak’s ‘speculum’s programmed with up-to-date Squeak Recognition’.

So this is neither a soft-centred piece of rhyming doggerel – we’ve heard enough of those recently on trailers for sporting events and after national disasters – nor a left-wing diatribe. The uncomfortable Jezza, though by and large admired, comes under the equal scrutiny of the budgie’s beady eye. It’s rather a plea for maturity, compassion and generosity in public life. Pipsqueak paces his cage and asks ‘what Prime-Ministers know / of the angst-ridden lives of the people they represent’. Unsurprisingly, it’s a stance that gets him into trouble, with the Home Office, and at the conclusion he finds himself facing deportation by ‘a country reclaiming control of its national borders.’ Still, his avian brethren flock down to his party, and a plea of mitigation is entered by Skelton’s Macaw, hoping that

We have, as John Gohorry reminds us finally, in his own voice, to live with our choices. In Squeak, Budgie! he’s contributed a courageous and timely book to the public debate. Buy it. Read it. Share it. Send it to your MP. Before it’s too late.