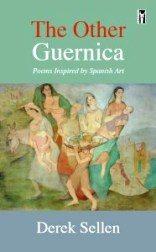 Derek Sellen’s note to his poem “Guernica – on the mural by Picasso” tells us that when Colin Powell, then US Secretary of State, came to the United Nations in February 2003 to seek approval for a multi-national invasion of Iraq, a blue veil was brought in to cover the building’s reproduction of Guernica ‘to avoid any jarring images’. The painting, Sellen says, lost none of its power:

Derek Sellen, also a writer of short stories and plays, has won various poetry awards, including Poets Meet Politics, O Bheal Five Words and Poetry Pulse. He was 2018 Canterbury Festival Poet of the Year. While his subjects range from Korean musicians to Indian cave-paintings, this collection concentrates on his love of Spain and Spanish culture.

The Other Guernica, elegantly published by Cultured Llama, is a masterclass in ekphrastic poetry. Its first lesson begins with the title and cover. “Flight” is one of five mysterious frescoes called “Los Otros Guernicas” commissioned of Spanish artist Luis Quintanilla to display in the Spanish Pavilion at the 1939 World’s Fair in Flushing Meadows. Because of Franco’s rise to ascendancy at home, the frescoes never made it to the Fair and were displayed instead by the Associated American Arts, after which they went missing. In 1990, a New York Times article declared that the frescoes had turned up in 144-146 Bleecker Street, NYC, once the avant garde Bleeker Street Cinema, then a gay porn movie house. “Los Otros Guernicas” deserve a film of their own, including their restoration and new home at the University of Cantabria in the part of northern Spain where Quintanilla was born.

Giving us the frescoes’ individual titles, Sellen brings their subject matter right to our door:

In his preface, the poet says, ‘The majority of the poems are “suggested” by the paintings and have in fact taken off in quite another direction from any that the artist intended’. The publisher provides an online list with links to the paintings in Sellen’s collection – if a reader cannot see the inspirational subject matter, ekphrastic poetry can feel rather one-eyed – but Sellen’s poems stand as vibrant pieces of imaginative art in their own right.

Several of the poems place us in the scenario of the painted character, eyeball to eyeball. Of “Aesop” (by Velazquez) for example, the poet says, ‘That face – you had to invent it’:

Other poems are in the voice of a character in the painting’s story. “The Firing Squad” gives us Goya’s famous “El 3 de Mayo” (painted in 1814 to celebrate Spain’s resistance to Napoleon’s armies during the Peninsular War). One of the fusiliers is speaking – ‘I am the third soldier from the left, tan boots, a tall hat’. He is not new to the job:

There may be a nod to Browning’s “My Last Duchess” in “La Marquesa, II” (responding to Retrato de la Marquesa de Alquibla by Angeles Santos) where a titled wife in 1928 is given her say, again in the first person. She has passed the age where she cares for blandishment:

These stories, often in sonnet form, are convincingly imagined and rendered with wit and impressive economy.

“Still Life – by Luis Melendez” is arguably Sellen’s most perfect ekphrastic work, compressing into his sonnet a trompe l’oeil discussion of how art plays at being real.

Sellen enjoys playing with our perception of the painting: ‘At any moment the cook will enter, the kitchen cat will salivate;/ but when you approach, it turns to paint.’

The collection is in four parts, the first (“Richer for Its Singularities”) being about relationships and individuals; the second (“They Hardly Know Why”) about war and violence; the third (“The Circling Bee”) art and artists, and four (“Olive, Almond, Honey, Fig”) about place. What has been missing until Part IV is the poet himself. After all the intellectual and artistic finesse of the previous sections, “Drunk In Salamanca” takes us to a city ‘not short of bars’:

Sellen’s Spanish friends are ‘re-baptising me after a long absence’. He is home again among the ‘rich facades’ of the city, discussing Franco, ‘his long regime a vanishing folk-memory’:

The evening has become a tender love story, running to the heart of this powerful, evocative collection.

Rosie Johnston‘s four poetry books, published by Lapwing Publications in Belfast, are Sweet Seventeens (2010), Orion (2012), Bittersweet Seventeens (2014) and Six-Count Jive (2019). Her poems have appeared or featured in Hedgerow, London Grip, Culture NI, FourxFour, The Honest Ulsterman, Ink, Sweat & Tears, Mary Evans Picture Library’s Poems and Pictures blog, Words for the Wild, From The Edge magazine and in Live Canon’s anthologies ‘154: In Response to Shakespeare’s Sonnets’ (2016) & ‘New Poems for Christmas’ (2018). She has read her poetry widely, including Hungerford Literary Festival, Watford’s Big Word festival, Winchester’s Loose Muse, the Poetry Cafe in Covent Garden, the Troubadour, Torriano, Margate’s Pie Factory, In-Words in Greenwich and Whitstable’s Harbour Books. Rosie was poet in residence for the Cambridgeshire Wildlife Trust until she moved to live by the sea in Kent. www.rosiejohnstonwrites.com