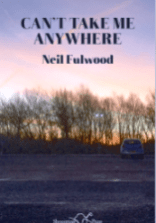 If one were to make the error of confusing the persona in a poem with that of the flesh and blood poet then one might read the title piece in Can’t Take Me Anywhere and suspect Neil Fulwood of being an irritating contrarian who likes ”asking for brown sauce / in the Michelin-starred restaurant.” Furthermore speaker goes on to portray himself as a sophisticated contrarian who could read the menu in French and who knows “how to spell / Folies-Bergère. Where the accent goes.” Subsequent poems may not take such a deliberately awkward point of view but they establish Fulwood’s poetic voice as being a forthright and confident one. His poems artfully seek to enlist the readers’ sympathies by inviting us to acknowledge our own sources of irritation which tempt us to react grumpily. ‘Never buy new shoes for a corpse’ is a list-poem made up of common-sense principles designed both to make us smile and also to appeal to a wide range of prejudices:

Impatience with the trivialities of social-media chatter is nicely captured with “I would like to take your hashtag / and use it as a cheese grater / until I’ve flaked away everything / that’s trending.” Fulwood may well be right to think that many of his readers are not Facebook followers because he also assumes that they are old enough to remember with affection the mid-twentieth century Guinness adverts in which cartoon toucans

‘Platform Zero’ introduces a subtle change of tone. Although this poem is, in part, a lugubrious complaint at being stranded on a deserted railway station it also shows a gentler skill with scene setting.

From railways to ice-road truckers to cranes Fulwood’s poems suggest he has a fondness for machinery and for heavy industry. ‘Work’ is written in memory of the poet Derek Buttress and, while not disguising the hazards of factory labour, it captures something of the genuine pride involved in making stuff

The machine that figures most often in the book’s first section is the family car. Fulwood’s poetic muse visits him from time to time when he is driving – either while frustrated by speed limits on a housing estate or else while being energised by a Brahms symphony on the car radio. The best of these motoring poems is ‘Directions’ in which a journey through bad weather offers an excellent metaphor for the process of questioning a decision already made

The book’s second section ‘The Ambridge Fountainhead’ digs into the mythology of picture postcard England and expects to “unearth bones and broken skulls”. Certain public figures who combine nostalgia for the Imperial system of weights and measures with a desire for England to be a swashbuckling super-power are mocked in the section’s title poem which places the Ayn Rand character Howard Roark within an episode of The Archers. On being asked to build a barn Roark promises himself it will be

There is a splendid pay-off line to this poem; you will have to buy the book to find out what it is.

Fulwood shows no sympathy for the expatriate Brit “in thrall to the value of the Euro” who curses “should his day-old copy of the Daily Mail / cost him more than it did last week” and he is scathing about the politician with “a briefcase full of misdirection” who “wants you to think well of him”. But there is strong empathy with those who are dealt cards in ‘The Zero Hours Tarot’

Fulwood offers wry contemporary variants of the tales of Sleeping Beauty, Alice in Wonderland and Robinson Crusoe; but he also casts doubt upon the effectiveness of literature to solve the world’s problems:

The final section ‘Foxtrot at the Golf Hotel’ takes its name from a list poem which plays with the airline industry’s phonetic alphabet. “Alpha males at the bar, baying their own bravos – / testosterone Charlies knocking them back …” Many of the poems in this section express nostalgia but of a gentler and saner variety than that of a Daily Mail reading Little Englander. There are fond memories of the kind of Dad who “budged up in his chair and made room” in order to tell stories before going outside to do some handyman domestic task where each design decision was “a guesstimate / but a bloody good un.” There are also two or three romantic reflections which are welcome even if they make rather a contrast with sardonic poems about “Auto-Wed Machines” and “Siri”, Apple’s “voice activated intelligent assistant” which are only a few pages away.

The most characteristically Fulwood-like poem in the closing part of the book is an up-to-date version of the children’s song ‘The Wheels on the Bus’ which, among other things, regrets that

and expresses the forthright view that while the baby on the bus might be screaming it’s less of an annoyance than “the student / on the bus who needs his rucksack rammed / up his arse, rammed up his arse.” Here, as elsewhere, Fulwood undoubtedly cultivates a curmudgeonly image but his judgements seem usually to be accurate and measured. Furthermore his poetic craft and rhetorical skills are well developed; and the fact that he is willing to appear as “Uncle Neil” in the ‘Wheels on the Bus’ poem makes this reviewer suspect that under his hard-to-please demeanour there beats quite a soft heart.  Or am I getting confused about personas again?