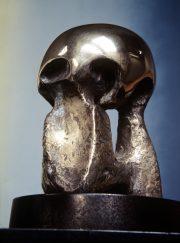 Visitors to the opulent Wallace Collection in fashionable Marylebone tend to be drawn to the aristocratic joy of Fragonard’s The Swing or the staggeringly ornate clocks.

But for Henry Moore, inspiration came from the austere thrills of the collection’s suits of armour and the combination of style and function that prevailed in helmets from ancient Greek times to the Middle Ages before finding new and sinister forms in the 20th-century world wars.

In the first exhibition to explore the evolution of Moore’s artistic obsession, the Wallace Collection brings together more than sixty sketches, drawings, maquettes and full-sized sculptures in plaster, lead and bronze, culminating in his seven Helmet Heads.

We peer at Moore’s tiny early horse sculpture in a pose redolent of the tension of combat and marvel, as Moore might have during his many visits to the Wallace Collection, at the craftsmanship behind the full suit of armour of King Vladislaus II of Bohemia and Hungary.

We also draw the connection with Moore’s own time on the battlefield when it is assumed he wore a Brodie helmet, nicknamed Salatschussel (salad bowl) by the Germans.

Real war experience gives Moore authority as he makes us aware of the potency of the helmet as at once a source of protection and a projection of power; as an extension of human form, it reminds us of our vulnerability and our craved-for invincibility.

Only slightly more tenuously, the exhibition finds a link between the idea of armour and Moore’s Internal/External sculptures, in which the outer layers protect inner structures. It’s not too great a leap to see the sculptor as the person who breaks through the outer shell to reveal the essence of the stone within.

If war made Moore’s fascination with armour a compulsion, its trauma required distance before he could fully address it.

This refreshingly concise exhibition builds up to the first display in one place of Moore’s seven Helmet heads, created between 1950 and 1975, when world war had given way to more local, but still deadly struggles.

In terms of aesthetic, you could prefer the simplicity of the Renaissance barbutes and sallets, but Moore’s ominous bronzes give us a far more three-dimensional sense of the twisting, anxious complexity contained within. 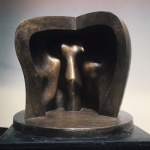 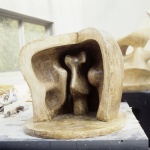 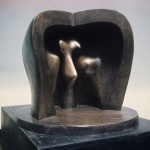 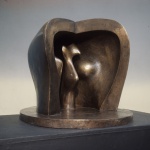 Tokyo: a bridge between tradition and modernity, by Carla Scarano D’Antonio. The Sweet Science of Bruising. Review by Jane McChrystal.