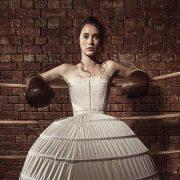 The Sweet Science of Bruising

Joy Wilkinson produced the script for the first episode of “Doctor Who” to be written and directed by women, with Jody Whittaker starring as the first female Doctor. In this episode, the Doctor travels in disguise as the Witchfinder General to Seventeenth Century England to try and save a woman condemned to death for witchcraft. It’s no surprise, then, that her latest play tells the story of a troupe of fictional women fighters scrabbling to earn a living in the real-life world of lady’s boxing in Victorian London and become world champion.

The four women come from very different backgrounds and their reasons for becoming boxers differ too, but each is driven by varying degrees of desperation.

Polly, an orphan with origins in the very lowest stratum of society, is the most vulnerable in some respects, but she’s also the scrappiest. Violet, nurse and all-round good egg, dreams of following in the footsteps of Elizabeth Garrett Anderson to study medicine in Paris. Quick-witted Matty wants to free herself from a life of prostitution, using the manners and modes of speech she has absorbed from her socially superior clients. Anna, an upper-class lady, longs for liberation from her subjugation to a cruel, abusive husband.

They work for a cynical huxster, Professor Sharp, who seeks to satisfy his audience’s thirst for the sight of unfettered female flesh in motion, while managing his charges with the detachment of a scientist observing bacteria in a petri dish. He stages and fixes the fights in his Islington venue, but the women want more. They want control.

Wilton’s Music Hall must have provided the setting for many rowdy performances since it opened in 1859 and forms the perfect backdrop to “The Sweet Science of Bruising”. The plot is whipped along by original and borrowed musical compositions directed by Max Perryment and the fights are choreographed by Kate Waters with great elan.

If you have qualms about contact sports or the idea of overcoming violence with more violence, it’s worth putting them aside to root for the heroic four. My only reservation is that some of the plot twists and the elaboration of more complex themes related to the women’s lives outside the ring lessen the impact of a potentially barnstorming entertainment.