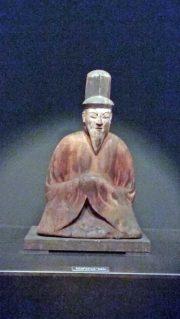 Tokyo: a bridge between tradition and modernity
Carla Scarano D’Antonio

Compared to Kyoto, Tokyo is bigger, busier and cosmopolitan.  My friend Ornella and I had plenty of time by ourselves as my daughter was busy with her course at the Bunka Gakuen University where she is attending a Master in Fashion and Design.  We had a tight schedule as our days in Japan were expiring.  Planning our visits, we realised there were many places to see but we decided to dedicate one whole day to shopping all the same.  Besides this, my daughter told us there was a special festival in the outskirts of Tokyo at a temple dedicated to fertility and also the Yayoi Kusama Museum we could not miss.

The fish market (Tsukiji) was a singular experience.  We immersed ourselves in the crowd and explored the narrow alleys packed with little shops and stalls selling mainly fish but also unusual vegetables, dried fruit and nuts, tea and pottery.  Tasters were everywhere so we tasted a lot, though most of the things were salty, which was not good for my high blood pressure.  We wandered absorbing the odours and the stimulating surroundings and finally decided to buy some seaweeds and salmon for dinner.  Ornella, who was the official cook of the group due to her superior culinary skills, had to wash them in water several times because of the salty taste.  She cooked the salmon slowly with her special herbs and secret ingredients but could not make the seaweeds better than what they were.  I liked them, though, and had a good portion, but had bowel problems the following day.

Ornella and I visited the Ueno Park on a glorious sunny day.  The sakura were slowly fading, the petals blown away by the breeze.  Japanese people were having their picnics under the trees drinking and chatting, happy to be photographed.  I was glad there were plenty of recycling bins with detailed differentiation, a rarity in Japan.  We visited the National Museum, which I found interesting and instructive, though my daughter thinks that it does not promote Japanese art and culture enough.  The displays give a broad idea of the culture without going into too much detail.  The Japanese Galleries focus on prints and calligraphy.  Famous prints by Utogawa Hiroshige, Utogawa Kunisada and Katsushika Hokusai are on display, beautiful views of landscapes and close-ups, women in fashionable clothes, kabuki actors and cherry trees, of course.  There are rich fabrics as well featured in several examples of kosode, a sort of kimono but less formal, worn both by men and women with open sleeves and designs inspired by nature and the changing of seasons.  Artistic objects of everyday life are on show, such as Netsuke, which are miniature sculptures that were used as tobacco pouches or to keep other personal belongings; they hanged from the obi sash as the kimono does not have pockets.  Combs and hairpins were, and are, very common from the early Edo period (16th century) on when women started to tie their hair up while in the past they used to wear it long hanging down at the back.  They are elegant accessories made of tortoise shell and precious metals decorated with coral and stones.  There are also costumes of Noh theatre, warrior attires, weapons, helmets, Zen painting, statues of deities, ceramics, lacquerware and metal articulated objects.  The large range of objects on display reminded me of the V&A but with some areas more focused on art, such as the part dedicated to calligraphy, which is a recognised art in Japan.  Poems and letters are beautifully transcribed on decorative paper.  The characters have artistic shapes, sinuous lines that hint to the object in an interweaving of meanings that is lost in our geometrical Latin alphabet.  The part dedicated to the Asian Galleries features objects from China and India mainly, ceramics, pottery and stone statues.

At Ueno Park we also saw the bronze statue of Saigõ Takamori, a famous Japanese hero and samurai.  At first we mistook it for the statue of Hachikõ, the Akita dog, and his owner Ueno.  The dog used to wait for him at Shibuya Station every day and continued to do it after Ueno’s death for nine years.  We did not visit the zoo but took a lot of photos around a delightful frog fountain and had our simple lunch near the pond where we had an interesting conversation, mixing French and English, about Brexit with two ladies originally from France but living between London and Tokyo.  That same day we also dragged our tired limbs (Ornella has a hip prosthesis and I had back pains) to the Tokyo Tower where we spotted a moving site dedicated to children’s care guardian deities who protect the care of children and the memory of miscarried babies.  They wear woollen hats to keep them warm.

The following day was Buddha’s birthday so we visited the Sensõ-ji temple where they offered us some delicious tea in small cups (we had many) and we made our usual offerings, wishes and prayers, and took a lot of photos.  I found it a bit too commercial compared to the temples we visited in Kyoto.  Outside, my friend Ornella spent a long time in shops choosing presents for her and her Italian friends.  I waited outside seating on benches, but this time I was prepared.  I had some books with me on Japanese culture and a selection of poems by Matsuo Bashõ.  He wrote more than a thousand haikus and travel sketches as well and I was eager to read as much as possible of his work.  He was a traveller and a wanderer as well as a Zen monk towards the end of his life.  His poems are about nature, of course, and Karumi (lightness), expressing non-attachment.  He was a traditionalist but also innovative in his sparseness and breaking of the rules of haiku’s syllabic structure.  He was a mystic, in his own way, dedicating his life to artistic achievements through Zen practice, an illumination he pursued in daily experience.  Here are some examples of his work:

This inspired me to write Bashõ’s haikus on cards to give as a present to friends and family back in Italy and England.  They very much appreciated and inspired poems on sakura among my fellow writers at the Woking Writers Circle.

My daughter took us to the famous Phallus festival (Kanamara), which featured a procession in costume and a parade of pink and black giant phalli.  People licked ice creams with phallic shapes and a long two hours’ queue led to the entrance of the temple, the Kanayama Shrine, dedicated to fertility but also to healing from venereal diseases.  We waited for the parade in a thick crowd which became dangerous when the procession passed.  We were pushed aside but I managed to record some videos and to take photos in some way.  My daughter found a beautiful fan and a purse on the pavement lost by someone in the mayhem.  She dutifully brought them at the lost and found office near the station though Ornella and I tried to discourage her, but she was unmovable.

We had to book tickets in advance for the Yayoi Kusama Museum, which displays only exhibitions and does not allow photos.  The current exhibition is ‘Here, Another Night Comes from Trillions of Light Years Away: eternal infinity’ and will last till August 31 2019.  I took some notes but I was not allowed to use my pen so they gave me a pencil, and I took photos from the catalogue.  Polka-dots were everywhere in the well-known Kusama style, not only on pictures but even in the toilet.  Her message of peace and openness is expressed in floating patterns, recurrent eyes, sort of ants and insects crawling around the canvas, cells touching, profiles and masks.  They are well crafted obsessions and hallucinations in bright colours that attract millions of visitors.  We loved it.

We dedicated our last day to shopping in the centre of Tokyo and in the commercial centre of Odaiba, an artificial island, until we exhausted our money.  We bought more tea bags, chopsticks and colourful handkerchiefs Japanese people use to dry their hands when there are no paper towels or driers in public toilets and we gave as presents to friends.  We also bought some clothes at Uniqlo attracted by the colours Japanese people usually wear, such as white, symbol of purity, beige and khaki, a sort of uniform.  We did not notice any beggars or homeless people around as begging is discouraged and Japanese culture stresses work ethics and discipline.

Flying back to Italy I read my stack of books on Japanese culture, more Bashõ poems and watched La grande bellezza (the great beauty), a cult film.  I loved my Japanese experience, their rituals, uniforms, delicate elegance, especially in women, their deep understanding of nature and great sensitivity to season changes.  I admire their capacity of merging different religious beliefs and philosophies, their sense of loyalty and impeccable organisation.  But it was time to say good bye to my beloved daughter and go back to my routines and imperfect world.