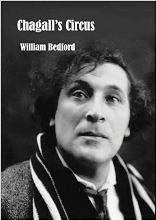 It is difficult to write poetry about art without being too descriptive, banal or, at the other extreme, wandering off the subject. None of these things happen in Bedford’s poems, in which a synthesis of biographical notes on the painter’s life merges with historical events of the time, along with images from his paintings and consideration of poetry as art, or art as poetry. As Bedford remarks, echoing Chagall, the artist created literature with his paintings, he ‘painted poetry’ – that is, he was at the same time a storyteller and a poet, not just a painter.

The collection centres on the figure of Chagall, whose photo is the cover page, and presents him as one of the leading artists of the twentieth century and as a poet in a metaphorical sense. The author examines his life and career in a chronological perspective.

Chagall is considered one of the major modernist painters and a renowned Jewish artist. His art was mainly influenced by Fauvism, but also by Cubism, Symbolism and Expressionism with abstract undertones. He produced a synthesis of these avant-garde movements without specifically adhering to any of them. He did not want to be labelled and thought that his work was ‘not the dream of one people but of all humanity’. Nevertheless, he worked in France for a long time and was in contact with the avant-garde movements, working and exhibiting with painters such as Picasso, Braque, Matisse, Delaunay and Léger. He produced not only paintings, drawings and etchings, but also stained glass windows for French cathedrals and for the United Nations, as well as tapestries, ceramics, murals, backdrops and costumes for theatres in New York, Paris and Moscow. He rivalled Picasso in his experimentation and versatility but not in quantity. He also painted the large scale canvas for the ceiling of the Paris Opéra celebrating singers, musicians and composers, ‘a gift of gratitude to France … without which there would be no colour and no freedom’.

Wherever he travelled and lived, his work was reminiscent of his childhood in the hometown of Vitebsk and of the folk culture of Shtetl, which were Jewish towns in Eastern Europe, with their distinctive Jewish traditions that were already disappearing. He came from a poor family of observant Hasidic Jews but was not himself a practising Jew. He experienced discrimination, pogroms and displacement in Russia, and fled to occupied France and the horrors of the second world war.

According to Picasso, Chagall understood what colour really was and his use of colours is, for most art critics, the main attraction of his paintings. His hues produce shapes, suggest movement, create a vibrant scene and reveal a unique vision. He recalled life from memories of his homeland, claiming an artistic freedom against the Russian, Bolshevik and Nazi powers. Music, art and his Jewish background greatly contributed to the development of his artwork communicating a sense of joy, compassion and tolerance represented in village scenes, the life of the peasants and intimate love encounters. His representations of rituals became iconic and inspire a sense of dignity and respect of diversity.

Bedford’s poems well express Chagall’s complex personality and treat his artwork as a ‘visual metaphor’ to be translated into lines on the page. The particular Chagall pictures which give the titles to the poems are listed at the end of the book along with notes from his autobiography, My Life, and with the dramatic historical events of the first half of the twentieth century. The poems are mostly in the voice of the artist telling the story of his childhood and then going through his life in Paris – he said that his art needed Paris ‘as much as a tree needs water’. The poems also tell of his love for his wife Bella.

The magical world of Vitebsk intermingles with the busy and successful years spent in Paris where he acquired fame in the art world and developed his unique style:

The events of the Russian revolution are evoked in thought-provoking lines:

Chagall and the poet not only question the outcomes of the Russian revolution but also claim artistic freedom which is fundamental to human dignity.

Bedford’s poems also highlight the connection between painting and poetry, as Chagall claimed he was making literature through painting, both in the sense of story-telling and as a visual metaphor:

The artist’s dream is a vision where the subjects are often upside down or floating in the air conveying a sense of humour and suggesting a personal dreamlike element.

The other theme often pointed out in these interesting poems is the positive attitude that persists in Chagall’s artwork in spite of the dramatic events he witnessed in his life:

This sense of hope, peacefulness and tolerance that encompasses art, music, theatre and poetry, and that makes us human, is the cultural message that Chagall and Bedford leave to us through their work.