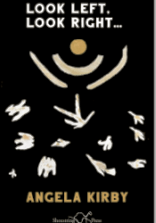 Given Angela Kirby’s reputation for lucid observation and sharp – one might even say spiky – dissections of human relationships, the title of her new collection could easily be taken as an admonition to do as she does: to observe, to consider both sides of things, to weigh things up …

It’s not till a good three quarters of the way into Look Left, Look Right that the poem ‘Still’ reveals the actual meaning of the title: a protective parent instilling into their child the simple but crucial mantra of the green cross code. ‘Still’ unfolds across three stanzas, a deceptively simple litany of a child’s progression through various scenarios fraught with potential danger, from going “flat out on your / first bike” to “all those boyfriends”, only for Kirby to deliver a gut-wrenching revelation in the last few lines.

It’s a technique she puts to good use throughout the collection: an accumulation of precisely rendered detail given real heft in the poem’s closing stages. Take, for example, the short stark lines of ‘Just Visiting’ which evoke the twilight atmosphere of

Stark lines, but still stringently crafted. That internal rhyme in “piss and disinfectant”, the way it continues a run of sibilants from the previous line which carry on across the next two – and beyond. Of the poem’s 21 lines, only two do not contain sibilants and the overall effect is a susurration. One can imagine the lowered, slightly embarrassed voices of visitors, or the soothing sotto voce imprecations of the nurses. ‘Just Visiting’ ends as an emotional resident requests her door be left open so she can go home

There’s something truly dreadful in that last line, something that’s little better than a death sentence, and the professionally bland way that’s imparted makes it all the more effective. It also freights the title with another layer of meaning.

Or take ‘Sticks and Stones’, which builds to a similar pay-off, but here the language is pejorative rather than blandly impersonal. It’s a short poem and worth quoting in full.

Kirby does so much here with, ostensibly, so little. Lines 1 to 7 inclusive are simply a list of insults tossed off by some controlling and hyper-critical alpha male (and isn’t the roadmap remark just so typical of a certain type of man?), but the construction brilliantly punctures his lack of originality as he swings between repetition (“Queen of Clutter”, “Casa Chaotica”, “Hurricane Lane”) and cliché (“neither use nor ornament”, “the cow’s tail”, “a chocolate fireguard”). The lines increase in length, denoting the worsening of his micro-aggressions over time. Then Kirby slam-dunks the reader with that provocative last line, which is simultaneously a commentary on the appeal of the total bastard and a defiant reminder that even total bastards can be taken advantage of.

In other poems, the end-point is subtler, less immediately impactful. A haunting resonance rather than a sucker-punch. ‘Walking With My Father, 1939’ ends as the eponymous walk ends, at the home of a friend where

The following poem, ‘North’, functions as a decades-later sequel and builds to a brusque penultimate stanza which speaks volumes about class, geography, resentment and how easily communication can reach stalemate; its closing lines are rueful and heavy with sadness. ‘Claiming the Astonishment’, a page later, closes the trilogy, landscape and mindscape merging, the poem reflective, autumnal. These are not the only pieces in the collection that conjure pin-drop silence in the reader’s mind, or whose words act as a diminuendo. But to continue this quoting of final lines would be the equivalent of throwing out narrative spoilers in a novel or movie review, as well as unfairly suggesting that the power of Kirby’s work lies solely in her closing lines. Nothing could be further from the truth.

Angela Kirby’s poetics are honed with a scalpel. Her craftsmanship is both unassuming and ruthlessly efficient. Some of her satirical barbs are unforgiving. But for all that she refuses to pull a single punch, it is also a tremendously rich and sensuous and ebullient poetry, particularly when she writes of food, travel and experience (the three and generally interlinked); and, in pieces as diverse as ‘Merry Christmas Everyone’ and ‘Alexander the Great in Vienna’, unexpectedly hilarious. It is the poetry of someone who has lived and laughed and revelled in the good times, and kicked back against everything else.