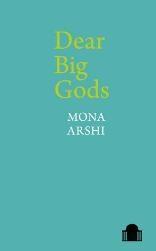 ‘Lyric poetry’ has typically been defined in opposition to ‘dramatic’ and ‘narrative’ verse. From the Greek root, lyric poetry is meant to be melodic, personal, expressing mood and emotion, often using traditional forms. Unfortunately, by this broad definition nearly all modern poetry is ‘lyrical’, but the least constrained poems today are scarcely melodic, rather solipsistic, and long. (One of my best teachers said of a well-written lyric poem, ‘Get in quickly, get out quickly.’)

Mona Arshi’s poems are purely lyrical in the best sense. Each poem carries its own weight and musical pleasure much like a Bach partita. By that analogy, each is densely, compactly written, with overtones. The entire collection is like a suite, best appreciated on several readings. Consider the ‘bookend’ poems: The opening poem, ‘Little Prayer’, is a humble supplication (note the hesitant lineation):

The title poem, ‘Dear Big Gods, which closes the book, slants right to left like a hemi-pyramid:

Here is the supplicant walking backwards out of the temple in reverence. Note the wonderful use of line organisation and line-breaks which enact the prayer by the poem’s own shape. As Robert Frost put it, ‘Like a piece of ice on a hot stove the poem must ride on its own melting.’

But the book is not simply a collection of lovely lyrics. There is a story embedded, with hints spread through various poems: the poet converses with a brother who has died, the way one shares news with a beloved in the grave:

The poet employs magical thinking to save would-be suicides. In “The Switch’, in a block of prose (here truncated):

The brother reappears to instruct her about the fluid border between life and death. In ‘A Pear from the Afterlife’:

At the risk of stereotyping, many of the poems have an Eastern sensibility; or perhaps ancient Greek; or Gaelic; or really from anywhere we acknowledge and allow spirits from other worlds to inhabit our own. Other poems adumbrate on the phenomenon, such as the poem titled by a news report from 2018, ‘In Mexico the women are marrying trees.’ Or, acknowledging the malevolent spirits, ‘The Wasps’, like the Furies, who attack a child en masse. Or the intelligences who live in other spaces of Earth, ‘Now I know the Truth about Octopuses (and the lies we tell our children)’. Or, ‘The Lilies’, in the poet’s ‘first tiny garden’ where she cannot protect them from canker, but respects them even in their state of suspension: ‘I suppose I could have/ pulled up their sick stems/ or poisoned them from the bottle./ But I let them live on/ beauty-drained in their altar beds.’ ‘Altar’ is the perfect word, suggesting sacrifice, gifts to gods.

I am in awe of this work.