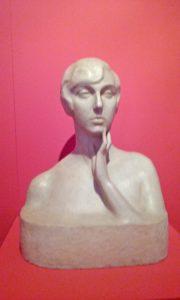 The ideal venue of the Municipal Gallery of Modern Art in via Francesco Crispi in Rome displays a vast range of pictures and sculptures from the Capitoline collections retracing the interpretation and development of the female form and her artistic personality from the end of the nineteenth century until today.

Apart from a great few names such as Artemisia Gentileschi, Rosalba Carriera, Frida Kahlo and Benedetta Cappa, women artists are a minority in the art world of the past and still struggle today to find their place.  Most of the works on display testify the strong presence of the female form in all periods as a naked body studied and explored by the male gaze.  Ambivalence and contradictions characterise the depiction of women as an angel figure, embodiment of the ideal mother and wife, or, on the contrary, as a threatening temptress, source of all sins.  This reflects the ambiguities of the twentieth century, a time of social changes prompted by the two world wars when women showed their commitment at patriotic, social and civil levels.  This commitment was acknowledged by political authorities but unfortunately no laws supporting women’s rights were promoted before the second half of the century.  In fact, in Italy women were granted vote only in 1946, divorce was introduced in 1970 and abortion became legal in 1978.

The exhibition shows in different sections how women are depicted in art from the personification of the sacred and profane love to focusing on the beauty of her naked body and the Freudian exploration of her psyche.  This reveals a crisis that runs across the twentieth century expressing a desire for change and emancipation often in contrast with the traditional roles of mother and wife.

In pictures such as ‘Wise Virgins and Foolish Virgins’ by Giulio Aristide Sartorio (1890) the two groups are separated in two different sections of the triptych highlighting two different aspects of femininity.  A similar vision is in ‘Sacred love and profane love’ a pencil and watercolours exquisite piece by Senio (1900), in which a Red Cross nurse wrapped in a dark cloak is opposed to the vanity of a coquette in a flapping flowery dress.  Naked women playing in Baths and interiors offer their voluptuous bodies to the viewer in provoking poses apparently oblivious of their identity as in Alessandro Pigna’s ‘Frigidarium’ (1882), Adolfo De Cardis’ ‘Naked woman with roses’ (1910), Camillo Innocenti’s ‘The Sultana’ (1913), or Istvan Csok’s ‘Corner of a studio’ (1905).

The beauty and gracefulness of woman’s naked body is celebrated in intimate contexts that underline its powerlessness but also its value which has allegorical and aesthetic importance in the art world.  It personifies the skill of the artists and conveys their emotions expressing vitality and fragility.  They also comment on the female role as in ‘Malice’ by Tommaso Bertolino (1950) where the naked composed figure with her arms crossed under her breasts communicates modesty rather than malice.  The beautiful ‘Naked woman’ by Arturo Dozzi (1926) exposes her flawless form in an act of donation that is a defenceless surrendering to the viewer.  Raffaele Costi’s ‘Two naked women’ (1945) is more unsettling in the expressionist depiction of two stylised nudes back to back, provoking and self-sufficient at the same time.  ‘Bathers’ by Attilio Torresini (1934) is reminiscent of Manet’s ‘Le Déjeuner sur l’herbe’, but no man is present here, it is an isolated all women’s world.

In the section Gazes of the Soul, elegant middle class women communicate their emotions through their ‘looks’ captured by the artist in an exchange between viewer and sitter creating empathy.  In the portraits of Amedeo Bocchi, Nicola Fabbricatore, Lionne, Marius Ledda, Antonio Donghi, Ildebrando Urbani and Vittoria Morelli there is an attentive study of the subject that highlights distinguishing personalities that seem to suggest an alternative to traditional roles.  It is the representation of the intellectual woman with distinctive ideas and autonomous look.  A similar view is in the works inspired by Freudian theories.  Solitary women are depicted in silent interiors absorbed in their thoughts, withdrawn in their own inner space.  It is an intellectual response to the classical exposed nakedness and to the roles of angel and temptress.  Paintings such as Vincenzo Irolli’s ‘Waiting’ (1915), Felice Casorati’s ‘Susanna’ (1929), or ‘Old cards’ by Baccio Maria Bacci (1953), testify this alternative vision that reveals a crisis of the traditional roles and a search of identity.

One of the highlights of the exhibition is ‘The Doubt’ by Giacomo Balla (1907), a portrait of his wife Elisa, where seduction and curiosity mix in the woman’s gaze turning to the viewer.  It is an invitation and a provocation to see more deeply beyond stereotypes.  A similar view is found in Mafai’s ‘Women undressing’ (1934), picturing dynamic disharmonious figures that challenge the stillness of classical pictures.

The contemporary works of Giosetta Fioroni, ‘The Other Ego’ (2012), Amparo Sard, ‘Part ¼’ (2014), Paola Gandolfi, ‘Ambra Jovinelli’ (2000) and Luigi Di Sarro, ‘Untitled’ (1975), are subversive and thought-provoking.  They reject the traditional roles subtly exposing the traps that imprison women as in the wired cage wrapping a crouched woman (Di Sarro), in the brick pattern that covers the woman’s figure (Fioroni), or in the nude outlined in pierced paper (Sard).  the works reveal the consequences of the diminishment and exclusion from leading roles women suffered throughout centuries.

A collage of videos from the archive of Istituto Luce (Cinecittà) recreate the feminine image of the twentieth century.  Different models of women are presented though motherhood and care of the family are primary.  Women are seen from the male point of view, they are advertised in magazines and films and emulated by the female audience.  They can be intellectual and mundane like Edda Mussolini, the Duce’s daughter, or the personification of the ideal mother like Rachele Mussolini, his wife, or Mussolini’s lover, Claretta Petacci.  The queen Elena embodied love for the nation donating her golden wedding ring to the cause, a role model for many Italian women.  Besides, there are the mondine (workers of paddy fields), seasonal workers in the rice fields of Po Delta and Po Valley who longed for stable works in factories that could grant them an independent life.

During Fascism the attitude towards women was contradictory, she was supported during pregnancy and rewarded for her role of mother and wife, as big families were funded by the state, but her place was at home.  It was a ‘libertà vigilata’ (freedom under surveillance), as the commentator of the video clip cleverly expresses.  The interviews interestingly include both women who joined the fascist Republic of Salò and women partisans.

A visible change starts only after the second world war when women acquire the right to vote.  They fought for Italian liberation during the war and gained the right to speak and participate in the political debate.  The first MPs are Teresa Noce, Nadia Spano and Rita Montagnana, a minority compared to the vast male participation but a good start.  The 1960s and 1970s are the years of the revolution.  Feminist groups fight in streets, squares and assemblies to demonstrate in favour of divorce and abortion.  Monica Vitti, Caterina Caselli and Gianna Nannini are icons of women’s emancipation.  The exhibition recalls the movement in the display of feminist posters such as ‘Le streghe son tornate’ (the witches are back) and women metaphorically crucified by history.  Social challenges and gender selection are still problems of today in spite of all the fights won by feminist movements.  Guerrilla Girls wonder if women need to be naked to enter museums still today and how long it will be so.

The bookshop at the entrance of the museum features books by Serena Dandini, Lilli Gruber, Luciana Littizzetto and the memorable Alda Merini.  They are the new role models of today’s society proposing different views in their stories, interviews, examples of women undertaking autonomous creative paths, as well as poetical and political visions.  A perceptible alternative towards equality and change.