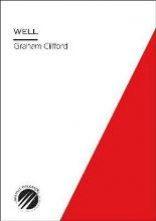 Coming after Clifford’s Seren collection, The Hitting Game, which was filled with characters and third person studies, Well seems like a marked shift in his work towards the first person singular. That said, there are also echoes of that earlier collection; Well’s title poem reads to me like the more personal version of The Hitting Game’s “Towards Morning”.

Whereas The Hitting Game started with the third person of ‘he’, Well’s opening lines of the opening poem “What the Rijksmuseum Did to me” read ‘I had a hard time in the gallery / trying to work out my place in it all.’ As an opening gambit or statement this is pretty clear, and that’s before we get to the next line: ‘Outside, a body smashed on to the pavement.’ This ups the ante quite significantly and sees the protagonist receiving empathy from the suicide victim—note, not the other way around

The heart not being in it suggests an absence of something and, if it’s not too oxymoronic, it’s absence that frequently appears in the collection. The second poem can’t make this any clearer. “Poem with Nothing in it” acts as a contradiction to itself, ending with the line ‘The absence of any point is remarkable.’ It’s remarkable for a couple of reasons, coming, as it does, at the close of a poem that began with ‘I try to write a poem devoid / of everything. / No family, no hopes, no horror. They said it can’t be done.’ The very act of conjuring these thoughts pours concrete things and people into this empty mould that Clifford has (de)constructed. Where are the family, where have they gone? Why no hope? What horrors are we not hearing about? The poem goes on to see the poet hold his breath ‘so the train window won’t mist’.

Clifford seems reluctant to leave a mark on the world, even the smallest one, and yet by leaving everything out, by holding back, we see everything unfold before us. In the final stanza we are told that a character ‘…stalk(s) its corridors / that go on like the hall that unfolds /when two mirrors face each other.’ before we come to the aforementioned last line. The poem itself reads like an infinite Hall of Mirrors without a horizon in which the reader and/or writer is seeing themselves reflected back in the accumulated distortions.

Absences keep going (or is it disappearing?) as the book proceeds. In “There Should Be a Machine” we’re told ‘When all the other children leave / silence fills the room. In “Still Not Ready Yet” the poet asks “’What am I missing?’. In “Smiling” there’s an absence of love and an absence of will or ability to do anything about it; instead we’re told

The list goes on with absent macaws, organs replaced by paper. This last poem, “Paper”, features the stanza

Even that ellipsis is an absence…

There is a notable lack of understanding or a questioning on the part of the first person, the ‘I ‘ that occurs through a lot of the poems in this collection. This is at its clearest in poems like the final one in the pamphlet, “Forgery” where ‘…A man / I don’t know, turns out / to be more me than me: we both know it. He finishes my thoughts, / fits my life snugger’. However, for me, it is the final lines of “Saturn” that seem best to sum up this collection.

I’m not suggesting for one second that Clifford is two-faced, but more that the true identity of the ‘I’ in these poems is always just out of reach – perhaps for both the reader and the writer. I started writing this review drinking coffee, but I was on the whiskey by the end – perhaps you can tell.

However, I got two glasses out: one for me and one for Graham Clifford. I hope I get to offer it to him. I really want to see where his work goes and what else he can draw out of himself.

“Upon that memorable Scene” Writing with Euripides, by Julia Pascal.