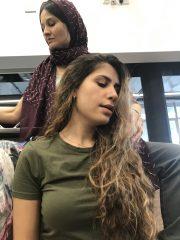 The idea of this drama came from an interview with a Kurdish soldier who had fled to England seeking asylum.  Her story of training in the desert, imprisonment by the Turks and her subsequent escape inspired me.  I learned about the courageous women soldiers who were fighting Daesh and Islamic patriarchy in their struggle for a Kurdish homeland.

I often have problems finding structure and Euripides’ Medea came to mind as I researched the history of the Kurdish desire for a national homeland.  After viewing Pasolini’s 1969 film with Maria Callas in the lead, I had ideas about transposing the myth to London today.  Jason would be Jason-Mohammed, the son of an Iraqi taxi-driver.  Medea would meet him in a gym where she worked as an illegal cleaner.  Love would happen and the story would follow Euripides’ narrative.

Jason and Medea would have sons but Jason’s father would make him give up the Kurdish Medea-she is not one of us- to marry his cousin Glauke.

So far so good but, during rehearsals, it hit me that I needed to express the outside world of London.  I needed a moral voice.  But with an ensemble of only five how could I do this?

Gradually the group began to echo areas of the text and subtly the company become the living chorus.  They are witnesses who watch but they cannot intervene.

What happened to create this chorus? I realised that, surreptitiously, Euripides infiltrated the process.  It was as if he were telling me this is my story.  Listen to me!

I never intended to co-write with an author who lived 484 BCE.  I had little choice.