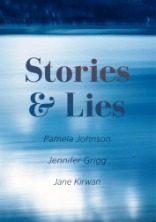 Three for the price of one: Michael Bartholomew-Biggs browses a compilation of poetry by Pamela Johnson, Jennifer Grigg & Jane Kirwan

Stories and Lies is effectively three chapbooks conveniently contained in one binding. Pamela Johnson, Jennifer Grigg and Jane Kirwan each contribute twenty-odd pages of poetry. As the overall title implies these contributions are loosely united by the theme of narratives – either those constructed to make sense of past events or else those which seek to conceal and confuse attempts to find out what really happened.

Pamela Johnson’s poems under the title “Cut on the Bias” interweave childhood memories of parents and family with more up to date accounts of adult encounters with mothers or fathers in their declining years. An experience of a semi-detached family life is well captured in “Lupins”

Note that deceptively innocent but telling last line. The child-narrator tells how she ‘watched them, ceaseless / in their separate tasks’ before seeking a more stimulating and colourful refuge ‘among the lupins’. But, in due course, a teenage girl with a car-owning boy friend finds other ways of escape.

But leaving pebble dash behind for ever is not so easy. “Brick Work” presents a more claustrophobic situation, face to face with an uncommunicative older person – probably a mother.

A similar sense of confinement and secrecy is conveyed in the grim relentlessness of the pantoum “London to Manchester” – ‘the train ploughs on past frozen fields… we might be boxed forever in this frost and fog.’ Throughout the journey there is no response to the question ‘why has she kept a frost on all her past?’ The narrator can only offer the consoling thought ‘I hope she did it to protect us.’ And answers to such questions may not even be obtained by eventual sifting through objects when clearing a house after its owner’s death. The weird and wonderful list poem “The Grand Tour” ultimately yields only ‘under the bed her suitcase – empty.’

A more fanciful way in which one stubborn person can kill a conversation with stonewalling, clichéd responses occurs in “The Consolation of Russian Proverbs”. And in “Parrot” Johnson skilfully turns the tables and takes us inside the fears and fixations of the elderly. We are told that ‘As a lad, Dad had a dread / of his grandma’s bird’ and now , as an old man, the prattling of his carer and his own caged condition in a residential home bring back his horror of the parrot’s meaningless chatter and the mockery of freedom it enjoyed when occasionally allowed a brief flight around the room.

Growing up, of course, need not only be a matter of relationship with parents. “Tunnel” is about the peer-pressure of siblings and playmates often exercised through daring one another to take risks

Similar bravado occurs among adults. The most overtly humorous poem in this selection deals with domestic myths and legends that accumulate and gain acceptance irrespective of evidence. Even though ‘Nobody in my family / has sailed the Atlantic’ the narrator has to listen to

Soon everyone is joining in. It seems her mother ‘taught herself / to gut swordfish with a potato peeler’. But the observation that ‘they never include me / in these tales’ eventually brings us back to the engagingly sombre and thoughtful tone which Johnson sustains so well in this selection.

The section “Lady Luck” by Jennifer Grigg begins, like Johnson’s, with poems of childhood; but this child’s story book, given by grandparents, hints at wider horizons than the domestic British:

“Summer Street” ventures from the mundane to the supernatural with the mention of a ghost ‘in the upstairs hall of number thirty-one.’ There is a more alarming sense of uncanny activity in “Peace of Mind”

Is this poltergeist activity? Perhaps, although there is also a hint that the poem describes the loss of security after a burglary.

There could, too, be something haunting about a child’s fascination with the long dresses of ‘beaded chiffon, taffeta, shantung’ that hang in her grandma’s closet. But closer observation brings matters back down to earth:

In the title poem we learn the identity of at least one of these men. ‘She once danced with Archie Leach – Oh he was clumsy, stood all over my feet!’

“Fire on Third” marks an abrupt switch from the security of private reminiscence to situations of public danger. It describes an evacuation following a (probably false) alarm in an art gallery and vividly catches the parental anxiety ‘nine year olds / weigh nothing compared / to death in a crowded stairwell.’ Other perils – this time caused by extreme weather – are featured in “Tornado Kills Six” and “Uncle Bob Turns 100” although in the latter case the peril lies only in the unwisdom of eating oysters during hot July in St Louis.

In the later stages of this section there are poems to do with exile and the reactions of strangers in an unfamiliar city. In London ‘the milkman’s horse amazed my little daughter – / he knew where to stop and put his feet up on the kerb.’ In New York there are ‘yellow taxis, fifteen-cent subway rides, double features.’ And, wherever one happens to be, an exile can claim that ‘loneliness, like a tattoo, marks me out.’ If you were a refugee

The worst extremes of exile are faced in ‘The Curtain’.

The glasses turn out in fact to be of limited use since ‘we had no books’; but as a substitute the narrator boasts that ‘I recited poetry for us’. Eventually, after ‘they changed my cell/ and took away my glasses’ the narrator asks his servant about ‘that lovely beaded curtain /… glittering on the wall’. (Even in Siberia, military rank counts for something and officers are entitled to be waited upon.)

Intentional or not, the poignant contrast with grandma’s lovely ‘beaded chiffon’ dress in the earlier poem is one example of the way that Grigg’s well-crafted poems work together and complement one another.

For me, Jane Kirwan’s poems in “One Made Earlier” are the most enigmatic in the compilation. They set up intriguing well-conjured scenes and situations but do not always gratify the reader with an easy pay-off or explanation.

A recurring theme is loss – or possibly usurpation – of identity. In the opening poem “So Near” an un-named ‘she’ is watching people on a beach and knows that what she is seeing

Now, she wonders, ‘if she scrambles over the wooden barrier’

Perhaps this is all about looking at an old photograph and feeling a risk of being drawn in and swallowed by the past. Certainly a photograph seems to present a danger in “Thou Shalt Not Stand Out” in which the narrator recalls her mother’s severe and sensible brown and cream coat and asks

Kirwan also reflects in “Passing Down Text” on how identity can be preserved by inheritance. And in “Infant” she writes of a grand-daughter – wonderfully characterised as ‘a little Napoleon with demands and gold buttons’ – and recalls that

This cheerful excursion into fanciful and magical thinking about renewal and restoration seems rather at odds with a thread of hostility to church and religion that runs through many of the poems. “Sunday Mass with Thoughts of Exile” draws on memories of spiteful and judgmental gossip in a congregation which a child, very understandably, ‘swears she’ll do litanies to escape’. “The Night before Christmas” makes fun of a cobbled-together crib scene in which ‘three wise men were cardboard cut from a cornflakes packet / that someone had painted green, and one kept falling over’. This is perhaps mildly affectionate; but there is nothing of affection in “Loaves and Fishes” with its picture of a woman expertly gutting fish which is coupled with fierce regret that she

(The tool she might need, according to the Letter to the Hebrews, is the word of God [which] is sharper than any two-edged sword…[and] able to judge the thoughts and intentions of the heart.)

There is also a brisk dismissal of most of the Ten Commandments beginning with ‘You loathe all brands of god’ but giving a grudging acquiescence to commandment four with ‘your parents are fine’. Number five also gets the nod because

With the Bible ruled out, Kirwan is interested in alternative attempts to create a better life narrative. The title poem is about trying to construct a substitute mother out of materials such as ‘old sweaters, used jam jars newly washed’. This version has some good points – it ‘stirs the porridge briskly’ – but in the end it goes ‘on a dud pile with the others’. Elsewhere, Kirwan finds herself on the receiving end of someone else who is keen on “Getting the Story Absolutely Right”

This is, I think, my favourite among Kirwan’s effective and powerful poems which remain uncompromising even when tackling uncertainties.