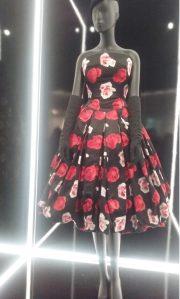 Two hundred unique artistic creations by Christian Dior and his successors are featured at the V&A exhibition.  It is the biggest show on the renowned French fashion house ever presented in Britain based on an exhibition of the Musée des Arts Décoratifs in Paris.  It opens with the famous ‘Bar Suit’ (Corolle line, spring/summer 1947) donated to the V&A in 1960 by House of Dior.  It is a revolutionary outfit with a black rich silk skirt and an ivory jacket marked by a narrow waistline that enhances the hips and the bust valorising the curves of the female body and evoking the petals of a flower (corolle).  The figure 8 is the shape that best describes the ‘New Look’ Dior created redefining the style of women’s fashion after the second world war.

Dior came from a wealthy family of manufacturers from Normandy and manifested artistic talent since his youth.  His parents wanted him to be a diplomat but then supported his love for art and funded his project for an art gallery where he exhibited works by surrealist and cubist painters such as Picasso, Braques, Duchamp, Magritte, Dalí and Giacometti.  Unfortunately, he had to sell his pictures after the financial crisis of 1929 and started to work for top Parisian fashion designers such as Robert Pignet and Lucien Lelong.

In 1946 he founded his own couture house, House of Dior, and had his first collection, New Look, in February 1947.  The couture house started with eighty-five members of staff and three ateliers but in eight years it had twenty-eight ateliers and more than a thousand staff, and by 1955 it covered fifty per cent of the exports of French haute couture.  In ten years Christian Dior launched twenty-two collections and opened retail outlets in the UK and in America.

The exhibition celebrates his artistic achievements and his success as a business man as well as his connections with Britain.  He once said he even liked English food and created Princess Margaret’s ball gown for her 21st birthday using raffia embroidery and sequins made from straw giving the idea of gold decorations.  The gown looks fabulous in its weightlessness and preciousness.

Some impressive sketches of his models highlight the rounded geometry of his figures, ‘silhouettes qui s’impose à l’imagination’ (figures that impose themselves to the imagination).  His concept of a dress was similar to the principles of architecture.  He constructed it like a sculpture according to the laws of proportion and in this way moulded the female body.  He both expressed a new vision of a desirable woman, after the austerity of the war years, and his concept of how a dress should be constructed.  According to him, a dress needs to be built like a piece of architecture and the line of the fabric, called grainline, is the secret of the cloth design.  The fashion designer has to obey the grainline of the fabric and make a dress that looks weightless.  It is an idealisation that makes his clothes look like pieces of art.

It is no wonder that he was the favourite stylist of film stars such as Rita Hayworth, Ava Gardner, Marilyn Monroe, Lauren Bacall, Liz Taylor and Marlene Dietrich, for whom he designed the whole wardrobe of Hitchcock’s film Stage Fright.

The exhibition displays the different stages of his career from the launching of New Look in 1947, to the lines of 1950-1953, which reveal less marked shapes, and the renovated style of the late 1950s where the waistline almost disappears in the Ligne H dresses looking like the fashion of the 1920s.

Some outfits stand out such as ‘Maxim’s Ensemble’ (En 8, spring/summer 1947), a black dress with tight waistline enhancing the bust and the hips, or ‘Ulysse Coat’ (autumn/winter 1952), a red coat loosely enwrapping the figure.  The ‘Sonnet Dress’ (Profilée line, autumn/winter 1952) and ‘Blandine Dress’ (Libre line, spring/summer 1957) are apparently simple outfits but show strong lines that define and idealise the body like in Greek sculptures.

The following section of the exhibition displays the creations of his successors: Yves Saint Laurent, who was only twenty-one when he took the lead of the couture house when Dior died in 1957, Marc Bohan, Gianfranco Ferré, John Galliano, Raf Simons and now Maria Grazia Chiuri.  The outfits are inspired by 18th century dresses of the king’s court at Versailles and also by mid and late 19th century dresses.  Their precious fabrics are richly decorated showing exaggerated and exclusive interpretations of examples from the past, as in the jacket by Ferré (spring/summer 1993) or in the ‘Look 24 Dress’ by Galliano (autumn/winter 2004).

Dior and his successors were also inspired by travels in their creations, both in textiles and models.  The exhibition features outfits from five countries: Mexico, Japan, Egypt, China and India.  Once again, the richness of the fabric and the embroideries combines with the line of the dresses giving a distinctive shape.

The last section is titled ‘Garden’, a reminiscence of the garden belonging to Dior’s mother in the family house at Granville, now Christian Dior Museum, and of the fashion designer’s passion for flowers.  The ‘Jardin Fleuri Dress’ by Maria Grazia Chiuri (spring/summer 2017) has petal-like hand died decorations throughout the gown giving the impression of a spring flower bed.  Flowers also inspired his love for perfumes that, according to Dior, were the ‘finishing touch of a dress’.  His first perfume, Miss Dior, was created in 1947 in honour of his sister Catherine Dior, in an elegant bottle inspired by ancient amphorae.

The exhibition amply testifies Dior’s career and his exclusive creations that revolutionised women’s fashion after the second world war and continued to inspire his successors in a legacy that encompasses boundless creativity, craftsmanship and business.